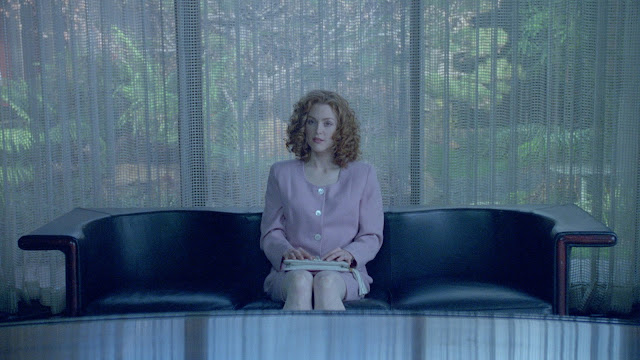 In the early days of the COVID-19 lock downs, we rewatched Contagion, Steven Soderbergh's 2011 medical thriller about a deadly virus that quickly spreads to a global pandemic.

scene) and then pivoting to finding a cure, we nervously laughed at the plausibility of how the current pathogen could parallel the film. With the tagline 'Nothing Spreads Like Fear', Contagion proves to be a realistic vision of a modern plague and many of its themes (conspiracy theories, sham treatments, mass panic) did emerge during COVID-19. In Contagion over 26 million people die worldwide (2.5 in the US) and there is vaccine lottery to distribute the lifesaving dose. Obviously what we've experienced over the last two years has went off script.

Todd Haynes' [Safe] might be the film that most accurately captures COVID's emotional vortex. At least for those in the work from home, Amazon Primed, liberal bubble. Released in the mid '90s, in the shadows of Reaganism and HIV/AIDS, [Safe] centers around a wealthy suburban California homemaker, Carol White (Julliane Moore), who begins suffering from a mysterious, invisible illness. Carol's random symptoms are mild at first, nosebleeds and coughing, before she goes into shock during a visit to the dry cleaners. Yet doctors and her husband are unable to diagnosis her, attributing it to stress. Carol then discovers Wrenwood, a remote community dedicated to helping those suffering from 'environmental illness' like herself. Living off the grid, the residents of Wrenwood wear masks and shelter in tiny homes. Carol finds refuge and renewal there, escaping the sickness of the modern world.

Over the last two years, we have lived in our own bubbles, where the unpredictability of the analog world has been flattened by digital comforts. Studies have shown that myopia has accelerated in children as they are trading screens for sunshine. Life has become a loop. Watching Nathan Fielder's The Rehearsal was revelatory, illuminating the optimization we seek in today's anxiety ridden world. Instead of quarantine, Fielder creates the ultimate safe space in which to repeat social situations until they reach their desired outcomes. The problem is that life always gets in the way.

What I watched in September: