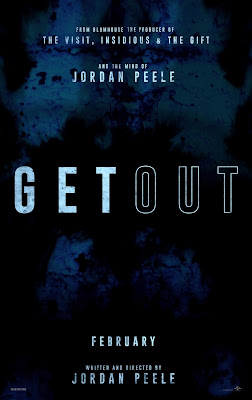 Following the "whitelash" election of Donald Trump to the Oval Office last November, Jordan Peele's timely directorial debut Get Out emerges as a winking, cunning comedy-thriller satire that roasts identity politics and race relations in the age of this neu-American nightmare that is the Trump administration. The film's plot and twists have been widely spelled out in the trailer: black boyfriend goes away for the weekend with this white girlfriend to meet the parents in the country, but something is not quite right and it becomes Guess Who's Coming To Dinner meets The 'Burbs.

It has recently been revealed that face-punched white nationalist Richard Spencer comes from a wealthy family of cotton farmers whose old money originates from the Jim Crow south; Spencer is an open racist but Get Out critiques something more frightening, the hidden agendas of the limousine liberal sect -- those who use terms such as "super-predators" and have "public and private positions" -- yet shallowly pander to minorities when there is something to gain. When Chris (Daniel Kaluuya) arrives at the Armitage's idyllic compound, he encounters two servants who seem to be creepy rejects from The Help. Chris shrugs it off because his girlfriend Allison's (Rose Williams) parents seem like lovey-dovey liberals who probably "like" Black Lives Matter on Facebook and as Rose's father Dean (Bradley Whitford) puts it "would've voted for Obama a third time" - a perverted "post-race" signifier that is repeated in the film.

The audience can quickly assess that Dean, who funnels Wolf Blitzer through a Roger Sterling jerk store, is a con; a pompous neurosurgeon who flings micro-aggressions at Chris, who is intensely objectified by Rose's hypnotist quack mother (Catherine Keener) and douchebag brother (Caleb Landry Jones). As he dodges the mother's chiding about cigarette smoking, it's turning into a weekend of awkward conversations for Chris, and Kayuula's performance hilariously captures the double-takes and come-agains as the innuendo becomes increasingly offensive.

Get Out is a double entendre; the opening scene of the film features a young black man lost in the suburbs, wandering around while chatting on his phone and searching for an address until a white Porsche stalks him, a masked-figure emerges and attacks and abducts the man, which tips to the notion that his kind is not welcome in those parts: Get Out. When Chris encounters this man later on at the strange Bilderberg type party at the Armitage's home, he has been "whitewashed" -- so much to the point that Chris attempts to document this man's bizarre behavior on his cellphone, but he accidentally snaps his camera's flash button -- which sends the man into a catatonic state where he begins lunging at Chris, shouting out what is actually advice: Get Out.

Around the mid-way point of the film, Get Out trades most of its social commentary for pure thrills and chills, as it becomes Die Hard infused with DePalma and Cronenberg (think Dead Ringers and Raising Cain). Chris's TSA agent friend Rod (Lil Rey Howery) is the comedic highlight of Get Out, who begins to suspect something is amiss as he investigates and supplies gut-busting zingers and funny business that feels at home with Peele's sketch-show background. Those laughs combine with pure lunacy and Get Out is a scary good time that is just as fun as Zombieland or Paranormal Activity with sprinkles of Next Friday and Chapelle's Show. What makes Get Out succeed is that it allows everyone of every background, as Peele aimed, to be able to slip into the shoes of Chris and feel the peril.

Kayuula is as magnetic and cool as John McClain and we are anxiously rooting for him to escape the clutches of the Armitage's horrific version of their own Tuskegee experiment. Rose is revealed to have a most sadistic form of jungle fever, as she's already moved on to her next target, NCAA prospects, while Chris is being confined and prepped for his brainwashing surgery. There are some interesting YouTube videos with black scholars and film critics breaking down different thematic elements and ruminating on secret messages and hidden meanings within Get Out, most of which deal with how African-Americans are exploited by corporations and politicians and are forced to operate in white society within certain accepted cultural stereotypes -- such as the Tiger Woods conversation Chris is boxed into during the Armitage's party.

As a photographer, Chris attempts to capture the insanity he's in, yet he's initially unaware it is him that is really the subject being observed at the party, he is the auction piece. His bidder is a blind art buyer (Stephen Root), who sympathetically contends that this is not about race, he wants Chris' eyes: the Armitages are not enslaving the bodies of African-Americans because they view them as the inferior race, but because they are in-vogue. Chris' wisecracking friend Rod has figured out the plot before Chris can, warning him he's about to get sucked into some Eyes Wide Shut Jeffrey Dahmer sex-slave shit. The Armitage's manor is a puzzling place like the Overlook Hotel in The Shining and Peele is teasing us in Stanley Kubrick fashion, peppering clues throughout the film that point to mankind being the most evil monster of all.

I've read some comparisons between Get Out and last year's Green Room, with the latter depicting Neo-Nazism but that film was a dud to me because it lacked charisma and it tried to be as shocking as GG Allin but was about as punk as Blink-182. In my eyes a more apt comparison is the Netflix smash Stranger Things, in which Get Out trades the altered reality of the "Upside Down" for the hypnotism induced "Sunken Place." Stranger Things is an addictive throwback that gives giddy Goonies goosebumps, tapping into Speilberg while Get Out's B&W fright could've been a diabolic tale spun by Hitchcock. Peele is a budding auteur, nostalgic for classic genre films whilst crafting Get Out with refreshing originality that masters the art of suspense.