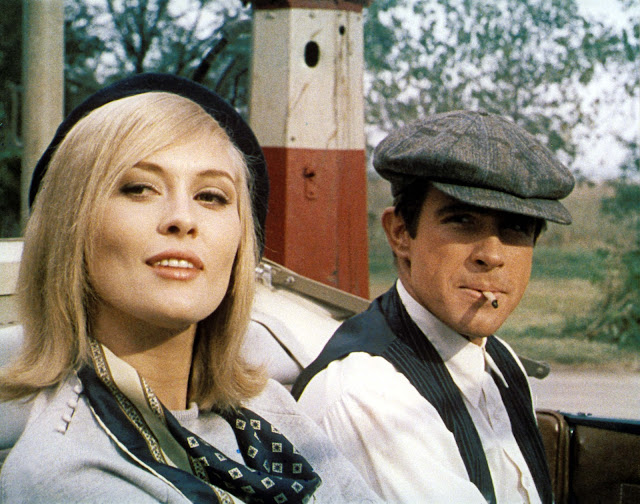 I watched a few films in a theater this July. By far the most cinematic was a 35mm screening of Arthur Penn's Bonnie and Clyde.

The print's rough condition added an additional layer of grit to the story of Great Depression bank robbers Clyde Barrow and Bonnie Parker. Watching a young and beautiful Warren Beatty and Faye Dunaway terrorize the countryside is as riveting now as it must've been in 1967 and in 1998, when it was included among the AFI's 100 Years... 100 Films. Penn's film is still unsettling, violent and raw. It's delirious and often hilarious, yet I didn't find myself laughing out loud, mostly in my head. The two young Genes, Hackman and Wilder, are mesmerizing in their roles. As is Estelle Parsons in her Oscar winning role as Hackman's grating wife.

The one film everyone was "supposed" to see "only" in the movie theater was the "long-awaited" sequel to Top Gun, Top Gun: Maverick. Delayed during the shutdowns of the pandemic so that it could have its day on the silver screen, Maverick opened to universal acclaim from seemingly everyone. I walked into the AMC on a Sunday evening hyped to see Tom Cruise on the big screen. But when the film started, with Cruise introducing the movie and thanking the audience for coming to see real fighter jets, I shifted a bit in my seat - wondering if the most interesting thing I was about to watch was the preceding Mission: Impossible trailer.

Maverick is about reconciling with the past. The plot centers on Maverick training a troop of rookie TOPGUN hotshots to do a secret mission. But when returning to TOPGUN, Maverick is haunted by the events of the first film, in particular the death of Goose. Goose's son Rooster (Miles Teller) is one of the students with a chip on his shoulder, upset that Maverick has interfered in his career. But Rooster is unaware that Maverick promised his mother that Rooster wouldn't have same fate as father Goose.

Rooster is cautious and technical. Maverick is ... a maverick. The ethos of the film is embedded in Maverick's advice to young Rooster: "Don't think. Just do." Go with your gut. After countless hours of practice, it should be automatic. In Maverick, Cruise demonstrates that experience matters. Don't count the old guy out yet. The boomer Maverick schools the millennials.

If Top Gun: Maverick sounds sentimental that's exactly what it is. Director James Kosinski made his feature debut in 2010 with another nostalgic update, Tron: Legacy. There isn't anything as stylistic in Maverick as in that film. Kosinski doesn't have the same flair that Tony Scott, the director of the first film, had. Maverick hangs on the memories of the first film therefore it's forgettable.

Yet in the theater, for 130 minutes, it's cotton candy. Despite the dangerous mission, there is little turbulence in the film itself. Making a movie stealing cameo, Val Kilmer's 'Iceman' warms hearts. Miles Teller has a funky mustache. Jon Hamm remixes Don Draper as a man in uniform. Fighter jets do flips. Tom Cruise gets the girl. The End. Let's get that Cocktail sequel next.

Going in with low expectations, Elvis left me all shook up. Baz Luhrman's glitzy style is a match for the glamorous King of Rock 'n Roll. Luhrmann's penchant for inserting modern music isn't as jarring in Elvis because it's used to showcase Presley's lasting influence. When a Doja Cat song plays as Elvis cruises Beale Street, it sorta works. There's also considerable time given to Presley's relationship with BB King and other musical legends of Beale Street. We watch Elvis awestruck by Little Richard belting out "Tutti Frutti."

A humble Elvis later rejects the 'King' moniker in the film, deferring to black R&B legends like Fats Domino. As a young boy growing up in Memphis, Presley loved gospel and we witness young Elvis baptized by the infectious soul of the church choir. With this conscious effort detailing how a white artist becomes a legitimate champion of black music, I was reminded of Eminem in 8 Mile where B-Rabbit battles for cred at The Shelter.

The film's narrator is Colonel Tom Parker (Tom Hanks), Presley's longtime manager who took 50% of everything the rocker earned. It's an initially bemusing choice made by Luhrmann that starts the film on shaky ground. But when Colonel Tom Parker (Tom Hanks) 'discovers' Elvis, there is a not so subtle nod to Nightmare Alley and the 'geek' metaphor as Presley is playing carnivals to make a name for himself. Parker sinks his hooks into Elvis and never lets go, methodically transforming the rebellious heartthrob into a cash machine powered by pills. Throughout the film, Elvis is restrained by the man - be it Colonel Parker, the censors or corporate interests. He eventually becomes a paranoid recluse barricaded in his Vegas suite, "Suspicious Minds"  being his worldview.

After watching the film, I was talking with someone who saw Elvis in concert towards the end of his life. Her recollection of dressing up and heading to the Saginaw Civic Center only to see a tired Elvis was one of sadness. By 1977, everyone knew Elvis was in decline. This impending doom hanging over Presley haunts the film. But Austin Butler, who is spellbinding as Elvis, injects so much vigor into his performance that even during the dark patches and biographical omissions, the film bursts with life. Beyond the starry gaze and thrusting pelvis, Butler transcends an impersonation and taps into something deeper in the spirit, he becomes Presley. At times, it's like seeing a ghost.

What I watched in July: