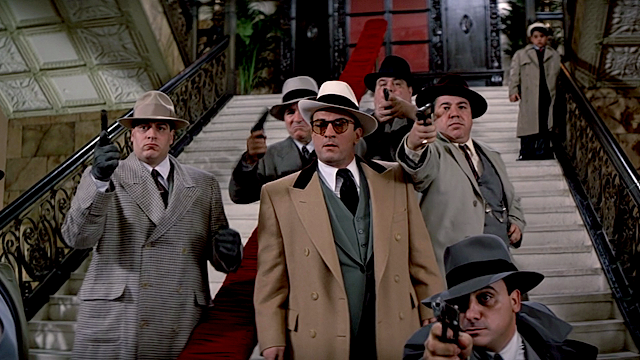 It's been at least 25 years since I last watched Brian De Palma's The Untouchables.

I remember middle school age me being excited to watch the movie that James Bond (Sean Connery) won his Academy Award for when I picked out the VHS from Blockbuster. In those days, I would often haunt the video aisles with a list as my father wandered through the New Release section. We would usually watch the New Release on Saturday evening and my pick on Sunday morning - films like The French Connection, The Conversation, Marathon Man, Dog Day Afternoon.

I remember thinking that De Palma's Prohibition era crime drama was a good movie, but not one of his that I felt compelled to revisit again and again like Scarface, Blow Out and Body Double. It wasn't until watching The Outfit, a crafty chamber piece about Chicago mobsters starring Mark Rylance, that I had the inclination to rewatch The Untouchables.

Seeing The Untouchables now, after living in the Windy City for the past five years, I am familiar with 'The Chicago Way' mindset that Sean Connery's character Malone tells Eliot Ness to adopt in order to bust Al Capone: "They pull a knife, you pull a gun. He sends one of yours to the hospital, you send one of his to the morgue. That's the Chicago way!" In the Second City, the justification of violence is deeply rooted and De Palma is never one to shy away from its brutality. I flinch when Capone, a menacing Robert De Niro, attacks one of his underlings with a baseball bat.

While Francis Ford Coppola made epics with The Godfather I & II, De Palma's gangster movies are pulpy throwbacks to the studio pictures with larger than life heroes and villains. In addition to De Palma's flair and a stacked cast, The Untouchables is further elevated by the trifecta of David Mamet's juicy dialogue, Giorgio Armani's sleek wardrobes and Ennio Morricone's tense score. So what is constructed as a basic crime thriller is boosted by all of these stylish elements. But what remains most memorable, evolving beyond the screen, is Malone's code: The Chicago Way.

What I watched in June: