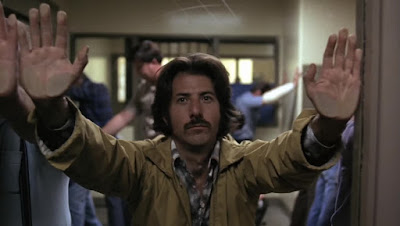 This Thursday at 12:45 AM EST you can catch Straight Time on Turner Classic Movies. Straight Time is a rare late seventies neo-noir gem starring Dustin Hoffman as recent parolee Max Dembo, who aims to go it "straight" and avoid returning to the clink.

But, fate has other plans for Dembo as he's entrapped by his cruel parole office (M. Emmet Walsh) and falls back into crime, hatching a big jewel heist with his old crew (Harry Dean Stanton, Gary Busey). Based on the novel No Beast So Fierce by convict turned screenwriter Edward Bunker, Straight Time began as a project directed by Hoffman himself, but with studio fears and self doubt about being in over one's head, Hoffman turned the gate over to Ulu Grosbard.

Set in roaming L.A. County during the late seventies, Straight Time evokes a similar feel to another cult classic from that same year, Walter Hill's The Driver. Michael Mann was an uncredited co-writer and the nerve racking jewel heist sequence in Straight Time serves as a primer to the bank robberies that take place in Mann's Heat. Like DeNiro in Heat, Hoffman's Dembo is a relatable anti-hero that is easy to root for as both films showcase the disquieting solitude of criminal life.