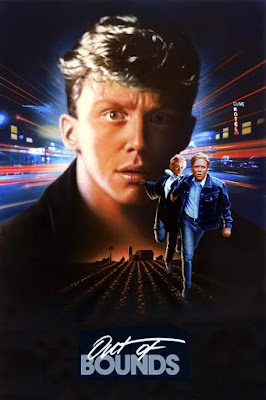 Very early this Saturday morning you can catch two obscure '80's Brat Pack thrillers, Out of Bounds from 1986 starring Anthony Michael Hall and Hiding Out from 1987 starring Jon Cryer.

The former film is especially rare, only available on VHS and streaming outlets. You can actually watch Hiding Out now if you have Amazon Prime, but I recommend the double feature with Out of Bounds. The films have similar plots, with Hall and Cryer on the run from bad guys. Both also feature killer soundtracks full of classic '80's music -- if you can track them down.

Of note is that it appears TCM is adding many of the films they broadcast to their streaming app, Watch TCM, which you can access through your TV provider. A highly recommended option if you don't have room on your DVR. Although it can't be guaranteed that the movie will show up on the service after airing.