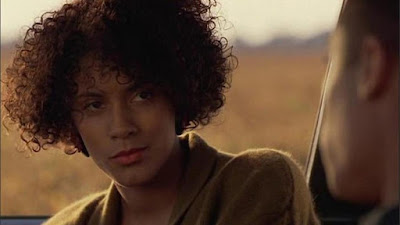 Over on the Criterion Channel you can stream this excellent early '90's neo-noir starring Bill Paxton and Billy Bob Thornton (in probably his most sinister role). It's part of their 'lovers on the run' theme for February that also features classics like They Live by Night and the indie gem Sun Don't Shine (highly recommended).

But you could also include One False Move as a pick for Black History Month, as it was the breakout indie smash for director Carl Franklin and features a stellar black cast including the standout Cynda Williams as Thornton's girlfriend Fantasia, who is trapped in a web of violence as Thornton and his cellmate buddy 'Pluto' (Michael Beach) rob drug dealers in Los Angeles and then flee for Texas. The film quietly examines the dichotomy between big city and rural policing and the inherent racial tensions. In One False Move, everyone is on edge and trigger happy.

The outlaw trio ultimately land in Fantasia's sleepy hometown of Star City, Arkansas where the L.A cops are awaiting them, along with the local sheriff 'Hurricane' Dixon (Paxton) who shares a secretive past with Fantasia. One False Move is at once brutal and bodacious, thrilling and hilarious, benefited by sharp pacing and a stellar script that fleshes out character's motives and quirks. Franklin would follow-up One False Move with the sultry Denzel mystery, Devil In a Blue Dress, where the action would travel back in time to post-war L.A.