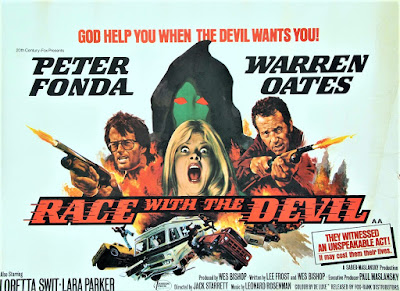 Back in September I posted a Lost Cinema entry about another Peter Fonda chase film, Dirty Marry, Crazy Larry. Race with the Devil is an excellent double-feature for pairing (in fact, a blu-ray of this very combo is available) but with a horror twist a la Tobe Hopper and Polanski.

Fonda plays a motorbike racer who goes on a RV trip from San Antonio to Colorado with his biz partner (Warren Oates) and their wives. After they've  established camp for the night in the meadows, Fonda and Oates are hanging outside and witness a bizarre sacrifice ritual by a satanic cult. In what could be deemed as a Duel meets Bohemian Grove, the cult also spots them and proceeds to chase them across the deserted highways and small Texas towns. Like Dirty Marry, Crazy Larry things don't end well for Fonda and company, yet Race with the Devil is more grim and its fiery last shot is quite haunting. A solid entry that blends the two genres of chase and horror with '70's maverick film making.

Race with the Devil is currently showing on FXM.