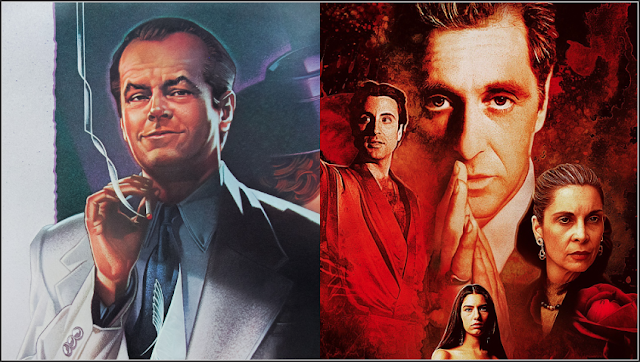 Paramount recently released on Blu-ray Jack Nicholson's 1990 follow-up to Chinatown, The Two Jakes, where he reprises his role as private investigator Jake Gittes in post-WWII Los Angeles. I had passively watched the movie about a year ago on Amazon Prime (it took me two nights to get through it). I was indifferent after that first viewing, yet there was something about The Two Jakes that stuck around with me -- how it carved out a expansive world of Los Angeles at that time and Nicholson's charismatic performance.

A long delayed sequel to a New Hollywood classic, The Two Jakes was doomed for box office failure in the early August of 1990, with little chance against summer blockbusters like Die Hard 2, Ghost and Presumed Innocent. Later that year in December, Paramount would also release The Godfather Part III, as if the studio was attempting to recapture the magic of 1974 when the last Godfather film and Chinatown were huge hits for Paramount. Ultimately, Francis Ford Coppola's film would fare better with critics and audiences, racking up Oscar nominations and delivering one of Michael Corleone's best lines.

But for all of the hoopla surrounding the final Godfather film, 1990 turned out to be a watershed year for gangster movies (as recently noted by Jason Bailey in the New York Times) with Martin Scorsese's Goodfellas leaving the lasting impression and influence on the genre with Quentin Tarantino's Reservoir Dogs and Pulp Fiction pushing the envelope in the ensuing decade. With the first two Godfather films and Chinatown being landmark films of the 1970's and New Hollywood, their '90's follow-ups were well crafted, but missing the moment. Chinatown is a classic neo-noir, if not the classic neo-noir, a '70's gem that transports you to the film noir era and therefore, like the Godfather films, is a period piece. Yet, the neo-noir movies of '90s were mostly set within the contemporary era with some aging better than others. Thirty years later, it's what makes The Two Jakes timeless and after a recent rewatch, a film that holds up very well in the shadows of its classic predecessor.

The Two Jakes opens in Gittes' office, his feet up on the desk as he's coaching another Jake (Harvey Keitel) on how to act surprised when he finds his wife cheating on him (they're planning to set her up on a wire recording). Things quickly spiral out of control on the day of the scheme when Keitel's Jake shoots the man dead and a mystery ensues involving oil and Gittes' past that ties in with the events and characters from first film. It's probably best to view The Two Jakes as the second half of a double-header following Chinatown, which is what I did with Paramount's new Blu-ray release. I popped in my Chinatown disc and revisited the classic first and then viewed The Two Jakes a couple nights later with the original film fresh in my head. While Nicholson (who took over for Robert Towne) isn't as artful of a director as Roman Polanski, he has great knack for mood and balancing the camera and the actors in the frame. The film is shot beautifully by Vilmos Zsigmond (The Deer Hunter, Blow Out) and in many ways is more entrancing to the eye than Chinatown - one scene in particular where Gittes is standing in his office against the sundown bleached window in the background is absolutely breathtaking. But the biggest draw of the film are the performances from Nicholson and Keitel, the pair had previously acted together in The Border (a small, effective film that is even more relevant today). As the titular two Jakes, Nicholson and Keitel have excellent chemistry and it's a blessing that Dustin Hoffman, Roy Scheider, Harrison Ford and Joe Pesci and all the other actors who were attached during development hell dropped out as I can't fathom Harrison Ford and Roy Schneider replacing Nicholson and Keitel.

Not the outdone by the production drama of The Two Jakes, the making of Chinatown was recently documented in a book by Sam Wasson (The Big Goodbye), which has since been optioned by Ben Affleck. Legendary Hollywood executive Robert Evans is central to Wasson's book and The Godfather films as well. Once a major player, his life became a trainwreck by the time The Two Jakes arrived, a film he was outlandishly cast in at one point, to screenwriter Towne's displeasure. Furthermore, Evans will be portrayed by Jake Gyllenhaal in yet another New Hollywood origin story, with Barry Levinson directing Gynellenhaal and Oscar Issac as Coppola in movie about the making of The Godfather. Also waxing nostalgic in December is Coppola himself, applying his "redux" revisionism to The Godfather III, with the Blu-ray release of The Godfather, Coda: The Death of Michael Corleone.

Just when I thought I was out, then pull me back in, indeed.