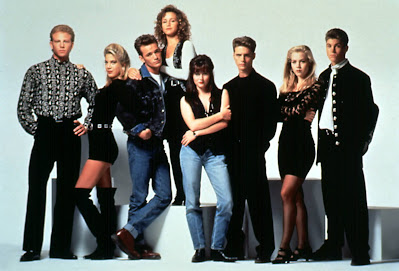 Pluto TV, a free TV streaming app, has delivered on an idea that I've long thought Netflix should do. Instead of just having a library of TV shows and movies you can watch on-demand, Pluto offers a huge line-up of channels broadcasting cozy content (Unsolved Mysteries, James Bond, 70s Cinema, Masterchef, etc) you can drop in at a moment's notice. One of these channels is all about the universe of Beverly Hills, 90210 and features that show, its 90210 reboot and Melrose Place.

The original Beverly Hills, 9010, the brainchild of Aaron Spelling and Darren Star, premiered on FOX in October of 1990. Following the two fraternal twins from Minnesota, Brandon and Brenda Wash (Jason Priestley, Shannen Doherty), adjusting to a new life among the glitz of West Beverly High, 90210 initially had low ratings before becoming a pop culture phenom in the summer of 1991. I was fan of the show in the '90s, magnetized by the beautiful cast, ritzy locales, hot cars and the show's knack for featuring great music of that era (Color Me Badd even guest starred in '92).

Watching the show now, it is an excellent time capsule of a bygone and frankly more fun era. What made 90210 great were the characters, the dialogue and the adventures. It never took itself too seriously as the soapy melodrama was balanced by unintentional(?) humor and lighter side-plots that have made the episodes age well. Nostalgia for the late Luke Perry as the brooding Dylan McKay is the highlight of the early seasons but the true center of the show was always Brandon's nice guy sensibilities navigating through the growing pains of life and confronting the hot button issues of the day. It all seems so innocent - and wishfully copacetic - now.