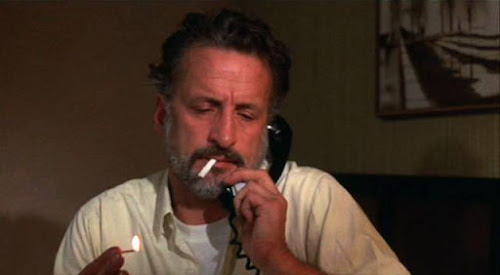 In The Hospital, dead bodies of the staff are piling up and the suicidal, recently divorced Dr. Herbert Bock (George C. Scott) begins to lose his grip as the hospital tailspins into utter chaos. Scott delivers a masterful performance as the hot-headed chief of medicine whose conservative ideologies and sense of self-worth are becoming dubious. It's the 1970s - his kids are rebellious runaways and there are protesters rallying outside the hospital. Hitting the sauce a little heavy, Bock has the self-actualization that he is not only impotent sexually but spiritually. In a moment of enlightenment, he rages at the medical industrial complex, screaming out into the darkness that: "We've established the most enormous medical entity ever conceived... and people are sicker than ever. We cure nothing! We heal nothing!"
While Bock's hospital may have run smoother and possibly avoided malpractice with today's technology, his scathing assessment of the American healthcare system rings truer than ever (COVID-19 notwithstanding). Aside from Arthur Hiller's crafty direction, The Hospital was largely orchestrated by screenwriter Paddy Chayefsky, whose script would garner him his second Academy Award for Best Screenplay after winning for Marty in 1956. If The Hospital embodied the systemic illness ailing our country, then Chayefsky's follow-up, Network, a masterpiece satire on media sensationalism erupting with Howard Beale's volcanic rants, is the sickness in our heads.