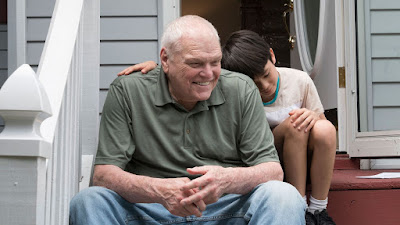 Hollywood legend Brian Dennehy passed away in April of this year. One of the all-time great character actors (as hilariously noted by Patton Oswalt), Dennehy is probably most remembered for playing John Wayne Gacy in To Catch a Killer and as the small-town cop harassing Rambo in First Blood along with roles in thrillers like the F/X films and Best Seller.

One of his final roles is playing a Korean War veteran and widower in Andrew Ahn's new film Driveways. Driveways is the follow-up to Ahn's first feature, Spa Night, a sultry slowburn centered around a closeted youth who takes a job at one of the spas in LA's Koreatown. I highly recommended tracking down the DVD from Strand - sadly there is no blu-ray.

Driveways is a coming of age tale centered around the relationship between a mother (Hong Chau) and her young son and their neighbor, played by Dennehy. Dennehy resembles my own maternal grandfather and the trailer for Driveways reminds me of the summer days I would spend with him as an adolescent before he would pass away when I was in middle school. With a strong cast in tow, Ahn seems to have crafted another gem with his second feature film.


Typically a film like Driveways would play at your local art house cinema or screen during an indie festival. Obviously we are in different times but luckily there are opportunities to stream movies like Driveways in the comfort of your own home and support the local independent movie theater of your choosing.