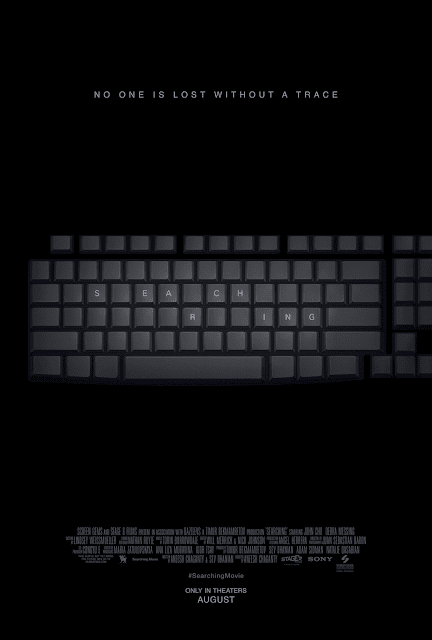 Daily life is mundane until someone is murdered or goes missing around midnight. This is when habits and errands, downloads and web browsing history can point to intrigue. Searching streams the mouse clicks, window sweeps and video chats of David Kim (John Cho), as he sleuths the internet for clues to locate his missing teenage daughter. A recently widowed father, Kim discovers a disconnect between the teenager he thought he knew and the life she was living online. Suddenly, every Instagram heart, online banking transaction and video feed leads Kim down a dizzying rabbit hole.

Searching was picked up by Sony Pictures at Sundance for $5 million and is the feature film debut of Aneesh Chaganty, who left Google a few years prior to pursue a career in Hollywood making movies. The irony of someone who worked at a FAANG company directing a film about the invasive nature of technology and social media isolation shouldn't be lost on viewers, it would've only been more ridiculous had Amazon Studios or Netflix bought the rights to this film as Sony has spent the last decade losing ground to comic book movies and binge inducing streaming platforms. Chaganty directed commercials for Google, so it's not that this is a tech-bro programmer who machine learned a script and had A.I. spit out some frames.  What Searching is, despite its usage of buffering screens and chat windows to tell its story, is an old fashioned mystery for the computer age, a net-noir that strikes the unnerving despair of the always connected technocracy.

Searching isn't as paranoid about privacy and surveillance as Francis Ford Coppola's The Conversation, but there is a certain symbiosis between Harry Caul's obsession to prevent a crime and Kim's determination to solve one. Caul is a surveillance mastermind who is, as a result, freakishly protective of his own personal privacy and also repulsed by how his recordings are used to destroy other people's lives; meanwhile, Kim hacks his daughter's laptop in hopes of tracking her down. While the creepy eavesdropping of wire-taps permeated '70's neo-noirs from The Conversation to Pakula films like Klute and All The President's Men, the post-Snowden climate of today presents a bold, out in the open, omnipresent, intrusive society to which films such as Catfish, Unfriended and Searching are unfolding in. The internet is a nasty place in 2018; twittering politicians, internet trolls and social media shamers have no conscience and mankind's keyboard seems to be guided by a doomsday driven invisible hand. In the decades before, tapes could be destroyed but now everything lives on in the cloud.

Operating in the Soderbergh style of sex, lies and videotape, Searching takes the gaze of the camera lens, focused on the vulnerability of a fractured nuclear family and the horrific tragedy that unfolds as Kim's missing daughter becomes a national media frenzy. The 16-year-old Margot Kim is a mystery onto herself, we never learn much about her aside from that she seems to be doing well in school, was once interested in playing piano before ditching lessons and doesn't like to empty the garbage; therefore it could be easy to believe that she could be leading a double life online. Credit the taut script and frenetic pacing of Searching, where the plot twists proliferate in pop-up ad fashion, heightened by Torin Borrowdale's shivery score.

Searching has drawn parallels to Gone Girl, David Fincher's 2014 masterpiece adaptation of the Gillian Flynn novel that, in all fairness did have a bigger budget and was based on a red-hot bestseller. Gone Girl was an event film and has aged into an evergreen mystery movie that is deliciously re-watchable and also benefits from using the big screen canvas, with Jeff Cronenweth's grand cinematography, the deft Trent Reznor/Atticus Ross score and Fincher's meticulous craft. Not to poo-poo what Chaganty and co-writer Sev Ohanian have accomplished with Searching, but a big-screen film that is told on small screens is confined within its programmed limitations. Both films are family affairs though, as the missing people are by-products of unhappy homes, although "Amazing" Amy's disappearance is of a sadistic self-inflicted vengeance against her cheating douchebag husband Nick Dunne (the perfectly cast Ben Affleck). But the timeless story told in Gone Girl could've happened in 1954 as easily as it did in 2014 and could probably still happen in 2034 whereas Searching, while not purely a gimmick, is trapped between classic and contemporary. 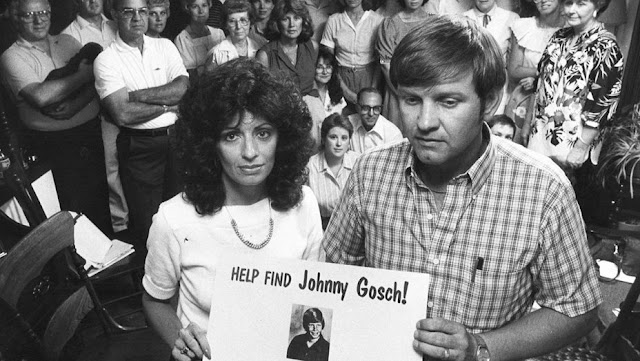 Perhaps the more interesting theme from Searching is how these missing children cases have evolved from the days of the milk carton kids to Amber Alerts. I was reminded of the chilling true crime documentary Who Took Johnny? that tells the story of how the eleven year old paperboy Johnny Gosch disappeared one early Sunday morning in 1982 while on his delivery route in his suburban West Des Moines neighborhood. The Gosch case is ripe with conspiracy theories including the alleged involvement in the Franklin cover-up scandal. The podcast Faded Out has gone on an engrossing deep dive into the cold case, interviewing Gosch's father and others close to the matter and digging up oodles of sordid details about some of the creepy happenings in early 1980's Iowa.

Growing up in Michigan I had heard about a similar case, the Oakland County Child Killer, which like the Gosch file remains unsolved and searching that online will lead to reddit forums and YouTube videos with people discussing various theories. The family of one of the victims, Timothy King, has been a presence in local media for the decades since, releasing their own documentary and the now middle-aged sister maintains a blog about the case. One peculiar theory that has emerged is that L. Brooks Patterson, then an Oakland County prosecutor and now the county executive, covered-up the case because one of the main suspects in the murders was Christopher Busch, a known pedophile who was the son of a high-level Detroit auto executive and that these crimes were linked to an underground network. Searching does not go down the path of secret Illuminati rituals but its finale does unravel a sickening conspiracy among an individual in a position of authority. The technology Kim is able to harness, along with cooperative law enforcement -- Debra Messing plays the no-nonsense detective on the case -- demonstrate how the sense of urgency is now drummed up in these matters, whereas in the case of Gosch the local police immediately assumed the boy just ran away.

Growing up in suburban Detroit in the '90's I remember seeing the missing children flyers that came with the junk mail and my parent's rule when playing in the neighborhood was to always be home when the street lights came on. I did freak out the summer after kindergarten when I was walking down my Hazel Park street in what would've been 1990 and saw a creepy blue "molester van" parked on the side street. There was a women in the passenger seat, skinny with dark curly hair and jagged teeth, she gave me a scary smile and I quickly ran home -- I may have even heard the door open on the van -- my memory is a bit foggy on that part. But this was the era of John Wayne Gacy being a recent memory and the missing Johnny Gosch and the Oakland County Child Killer cases bringing awareness that children shouldn't talk to strangers -- and there were urban legends, in Madison Heights where I lived after kindergarten and through middle school there was a "blood house" in my suburb that was literally an abandoned brick home on an otherwise nice street. And of course who doesn't remember turning off the bathroom lights and playing Bloody Mary.

A major part of what makes John Carpenter's original Halloween still terrifying today is the notion that "The Bogeyman" exists. Searching teases the killer jumping out from the computer screen, as it arrives in a time of the "dark web" and Slenderman, where what is happening offline is still the unsettling truth we are seeking. Ultimately, despite a deluge of suspense, Searching is not a horror film as advertised. As for the missing persons genre, Searching is not harsh and sleazy like Paul Schrader's Hardcore, it doesn't have a bone-chilling climax as is the unsettling end to the dutch classic The Vanishing or the sense of dread of Denis Villenueve's Prisoners. What it does offer is some good comic relief and a thrilling, fun experience built upon a gimmick, such as in A Quiet Place or even the IT reboot from last year. In a p.c., safe-space era, Searching ends with hope, reconciliation and a tearful parable on family dynamics -- that it succumbs to this level of feel-good kitsch is what holds it back from being a great mystery instead of a good drama masquerading as a scary movie. I feel one final frame was missing from the end of this film that would've left a lasting chill: a missed call from fish_n_chips.