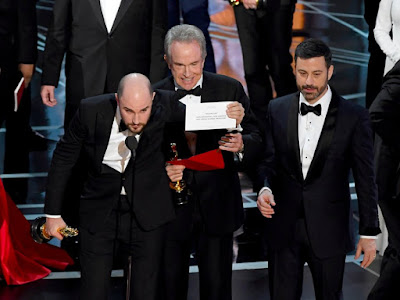 Lady Bird - I much would've preferred to see The Florida Project nominated in place of Lady Bird because it's a much better coming of age film, but Lady Bird could be the dark horse winner on Sunday night.

Phantom Thread - Jennifer Lawrence turned it off after 3 minutes and I think that's the best way to sum up its Oscar chances.

The Post - Blade Runner 2049 should've been nominated instead of this movie that wants to be Spotlight and All The President's Men but it's neither.

The Shape of Water - The best film out of all the nominated ones and my prediction for winner.

Best Director:
It would be very cool to see first-timers Jordan Peele or Greta Gerwig snag this trophy, but Guillermo del Toro should win and I think he will.

Best Actor:
It seems Gary Oldman is a lock for his Winston Churchill impression in Darkest Hour, where eats a lot and bitches at women in a really nasally British voice. It's probably the best out of the nominees, despite the rule that Daniel Day Lewis automatically wins Best Actor whenever he is nominated. I'm still pissed Robert Pattinson didn't even get nominated for Good Time.

Best Actress:
I thought Sally Hawkins' performance was absolutely stunning and beautiful in The Shape of Water and in many ways she was a much "stronger woman" than the role Frances McDormand played in Three Billboards. I predict Hawkins.

Best Supporting Actor
It's really assholes versus nice guys in this category. As much as I'd like to see Willem Dafoe or Richard Jenkins win for their portrayals as really good guys, I think Sam Rockwell is picking up another trophy for playing the racist cop.

Original Screenplay
The Shape of Water... yeah I heard it was ripped off from some playwright, whatever, I don't care!

Adapted Screenplay
Call Me by Your Name, right?

And finally, Blade Runner 2049 better win any awards it's nominated for.