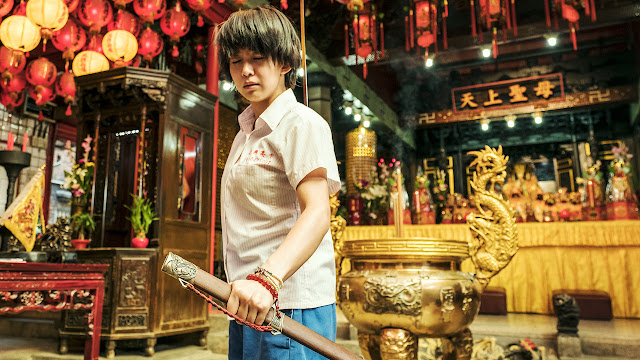 While I've been laughing along with the return of Larry David's hi-jinx in the new season of Curb Your Enthusiasm, there's a new show that quickly became an all-time favorite and it arrives imported from HBO Asia. The Teenage Psychic, a six-episode Taiwanese mini-series, combines the supernatural bent of Stranger Things with the tugging heart strings of Edward Yang. Reminiscent in naivete to Eleven, sixteen year-old orphan Xiao Zhen (Kuo Shu-yao) struggles to balance her medium powers with the typical high school drama. Xiao Zhen lives at a temple, run by her surrogate father of sorts Teacher Kim (Akio Chen), who carts out Xiao Zhen as "The Holy Maiden" as local villagers seek romantic advice and he peddles love potions. But despite some snake-oil shenanigans, "The Holy Maiden" does perform rituals to ward off evil spirits possessing the living and can see the dead to help grieving survivors. Despite her gift, Xiao Zhen would rather be a normal teenager, but fate contrasts with her desire to leave the temple.

Director Chen He Yu achieves a great deal of naturalism from his cast, especially with the young actors starring in the classmate roles. Xiao Zhen is in the drama club and her interactions with her friends, the teachers and the school's militant disciplinarian are cut from the same cloth as Yang's classic A Brighter Summer Day -- down to the traditional school uniforms. The colors and textures hit touches of Yang as well as Wong Kar Wai's neon '90's work as we could have in He Yu the second coming of that golden new wave era. The temple scenes -- cloaked with the array of glowing lanterns, simmering incense, and looming Buddhas are the touchstones of each episode with "The Holy Maiden" giving out the spiritual guidance that is often just as much for her as it is for her devotees.

When Xiao Zhen catches the eyes of Ah Le (Kent Tsai) when trying to jump over a wall to sneak into school, his helpful hand leads to a budding romance between the two that arcs through the series. The two are playing in the school's production of Romeo & Juliet, though Ah Le is playing Romeo and Xiao Zhen is an extra, there is a Shakespearean tragedy in the fragility of their own relationship. The Teenage Psychic is cute and charming and even its chilly supernatural moments eventually lend to a warm, often tear-jerking resolution. He Yu is a masterful storyteller and he's developed zesty characters and a tender anti-hero in "The Holy Maiden" who can see the dead among the living and also help the living to see life with a clearer perspective. Can't wait to return to the temple for season two.