In John Carpenter's They Live, Roddy Piper, ripped and rugged, is a drifter wandering through the desolate Pacific Northwest, looking for an honest's days work in the aftermath of Reaganomics America. He finds a gig on a construction site in Los Angeles, where he can shovel dirt, with his muscles glistening in the warm sun, finding refuge in the tent cities that director John Carpenter constructs as a prediction of a future caste system to come to the USA. Casting the Saskatchewan born Piper was a brilliant move, because his tough-guy wrestler shell exuded all that was America at the time, yet his knowing, wearied stare gave him a Gregory Peck quality, he was worn down but not beat down. He wasn't Hulk Hogan ripping his shirt off, but he would kick some ass. And beat ass he did, in a totally awesome fight with Keith David, in which he's trying to convince his friend to try on the sunglasses that allow him to see the creepy aliens disguised as the bourgeoisie upper crust humans.

Carpenter has become a verb, a cinematic philosophy, an accidental icon whose low-budget slasher classic Halloween (currently showing in theaters this season as a digital remaster supervised by cinematographer Dean Cundey) gave him the clout to survive in Hollywood, churning out hits in the '80s with Kurt Russell and adapting Stephen King with Christine. Currently he's found a second wind embracing his musical chops, touring on the strength of his iconic film scores and releasing albums of "lost themes." When the mysterious keys and hollow bass boom on the main theme to They Live, Carpenter reels viewers in with the sense of doom awaiting John Nada (Piper), who is suspicious about the activities occurring at the church across the street from the shanty town.

They Live is an Orwellian nightmare, but with Roddy Piper crashing the party to take out the bad guys, he shoots them with his gun and insults them with his gnarly tongue. Carpenter's film was a reaction to the Reagan years and its trickle-down economics, contending that the system was rigged and television was the great deceiver, designed to control our minds and sell us shit. When Nada, a believer in America, looks through the knock-off Wayfarers the resistance has designed to scramble the alien's messages, he sees the world in black and white, billboard ads transformed to a singular command of "OBEY" (which would obviously influence Shepard Fairey later on) and newscasters are actually aliens brainwashing us. They Live is more terrifying now, in the age of the squeezed working class flocking to rapidly expanding Dollar Generals, another celluloid star in the Oval Office, and technology tracking us and fueling our consumption. If it's not aliens among us secretly running our lives, it's the mega-rich, corporations and the emerging A.I. and V.R. -- and now people put on headsets to escape to a new world, rather than see our current one for just how scary it actually is. 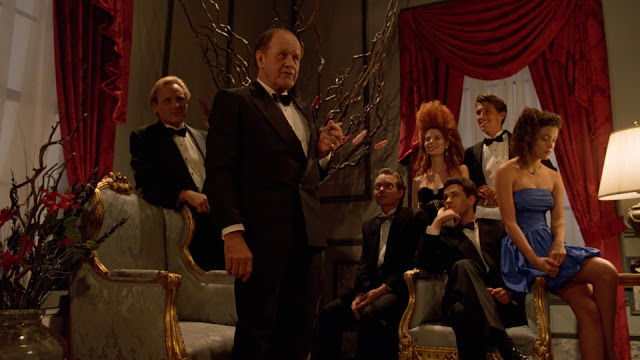 Society, as in "secret society," plays as if David Cronenberg directed a body-horror Beverly Hills 90210. Bill Whitney (Billy Warlock, of Baywatch fame) is a boy-next-door type who just happens to be a rich Beverly Hills kid who lives in a sprawling estate. But Bill senses that something is not right, he seems to be a black sheep in his family and doesn't fit in with their affluent circle. Brian Yuzna's film has a Bret Easton Ellis take on the rich and powerful, that below the surface these are dark monsters. Yuzna brings up the concept of "simulacra" when dissecting Society, which essentially means with Society, in the land of luxury all that glitters isn't gold. The film is surreal from its opening frame, with Billy lurking around his gigantic mansion and stumbling into the kitchen to grab a butcher knife, paranoid and on-edge, knowing that something or someone is out to get him.

From the Bohemian Grove to the Franklin cover-up, there has always been whispers of elites involved in kinky orgies and occult rituals. Society explores these themes on a ridiculously grotesque level, where mind-binding special effects acheivements were accomplished by Yuzna and FX artist Screaming Mad George. As Billy begins to unravel the mystery as to what his family and their friends are actually involved in, he also realizes these are powerful people who are out to protect their secrets. Society is reminiscent of Get Out and Rosemary's Baby in tone and structure and the stomach-churning reveal is just as shocking. Yuzna's straight-forward style meshes well with the puzzle pieces our protagonist Billy is trying figure out. Arrow Video's Blu-ray restoration is a magnificent presentation of a film that has aged quite well; the haircuts, glossy cars and trendy outfits make the era come alive. Yuzna's film offers a perverse interpretation of the old money ruling class who literally feed off the sheeple poor. I can't imagine any horror movie as terrifying as one that explores what twisted shit the 1% do behind closed doors, as if them holding the majority of the world's wealth isn't scary enough already.

They Live is available on a restored Blu-ray from Shout! Factory and Society from Arrow Video, both in standard collector's editions and steelbooks.