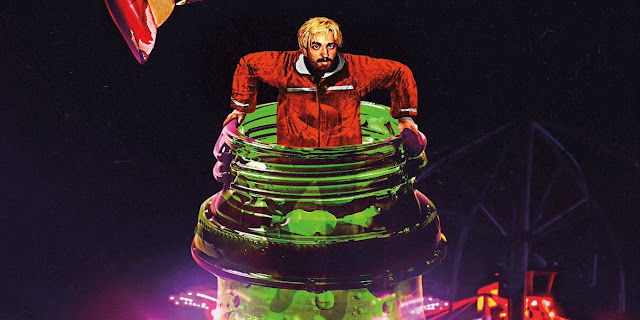 I always loved the show COPS because of its mix of mysterious reality and adrenaline rush -- the seedy locales where patrol cars pull over a suspicious vehicle cruising down a desolate block late at night and proceed to giving chase, cameraman running in tow. Giving a raw glimpse into the criminal underworld, these lawbreakers are not glamorous "Goodfellas" with slick swagger, most are bad liars and slow runners; their capers poorly planned and executed.

In Good Time, a gritty throwback to grimy '70's New York crimewave hysteria such as Mean Streets and Death Wish, it feels as if the camera on COPS is focused from the perspective of the petty criminal, rewinding to get the raw backstories. The film gestures to this when nutcase Connie Nikas (Robert Pattinson) is slouching on the couch watching an episode of COPS and then later on flips to live news reports about himself being a wanted fugitive.

Good Time is a claustrophobic thriller from the opening frame, where we meet Nick (Ben Safdie), Connie's mentally handicapped brother, who is in the middle of being examined by a psychiatrist as the camera is zoomed in on his puffy face and gaping mouth as a tear runs down his cheek, our ears pillowed by his muffled mumbles. But suddenly Connie bursts into the room, chastising the doctor and bullying him, grabbing Nick like an angry parent picking up a child from the principal's office. Unable to cope with his brother's disability, Connie is at times in denial, asking Nick if he sees himself like the other obviously handicapped patients at the facility. It's a tough scene to watch and in Good Time, Connie's unhinged behavior makes for a compounding shock fest.

The pastel hues are splashed on-screen as brothers Connie and Nick, when running from the police after a botched bank robbery, become perfumed with bright neon pink paint that explodes from the marked bills.  With a near fishbowl lens immersion, the Safdies commit to film probably the grittiest scene ever shot inside a Domino's Pizza when they attempt to wash it from their faces and hide the stash. Connie gets away, but Nick is caught and locked up in the hellish cage of Rikers Island and the rest of the film follows his brother's frenzied attempt to free Nicky from prison.

Capturing the award for Best Soundtrack at the 2017 Cannes Film Festival (Pattinson was certainly deserving of Best Actor, but Joaquin Phoenix took the prize for You Were Never Really Here), Oneohtrix Point Never's score for Good Time is blanketed in frosty synthesizers that elevate the visual panache and crank the film's hypertensive pace to a frantic, arm-rest clutching thrill ride. Oneohtrix's compositions are as synonymous to Good Time as Tangerine Dream to Risky Business, Giorgio Moroder's "The Chase" to Midnight Express or Cliff Martinez's work with Winding Refn. Majestic chillers "Romance Apocalypse" and "Flashback" outshine Pattinson and his groovy blonde locks.

Good Time is as much a crime story as it is a tale of family dysfunction and brotherly love, a wicked stepchild of Rain Man and Hell or High Water on an acid trip. It's a compelling film basked in edgy style, transparent in narrative with just enough truth is stranger than fiction twists to be believable, heightened by Pattinson's watershed performance and further boosted by wickedly hypnotic music. The Safdies hold nothing back in bringing the seedy underworld to life as Good Time sinks its viewers into the sewer with the rats, where the last bad boy you'd want to meet in a dark alley would be Connie Nikas.