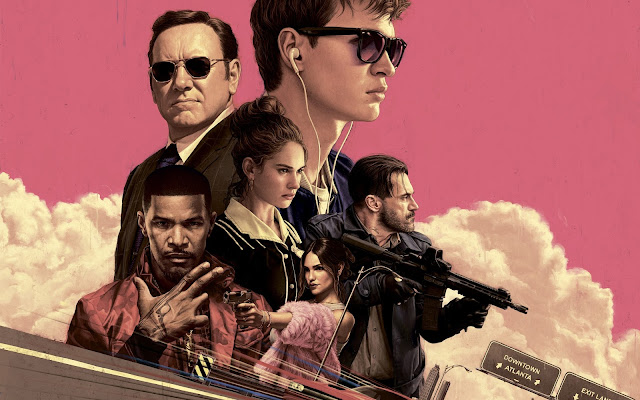 I was cruising on Lake Shore Drive en-route to catch Baby Driver on the big screen when my low tire-pressure light started glowing from my dashboard. I didn't panic, I was in control and felt cool, calm and collected in my blue-mirrored sunglasses. I knew, just knew, that I would find a gas station on way to the Kerasotes ShowPlace Icon. But would that service station have an air machine? Would it be quarters only, would I be able to find change or an ATM on Sunday in quick enough time to not miss the afternoon matinee start time? There was some suspense gripping the steering wheel suddenly as I pondered my fate.  What if my blue Honda Accord had a blowout on Lake Shore? I do have a smartphone and a credit card, I wouldn't be stranded. But talk about a fucking inconvenience. I knew I should've taken an Uber.

I did make it safely to the theater, on time to see the latest Blade Runner 2049 trailer featuring Ryan Gosling glaring at a grizzly Harrison Ford. In Baby Driver, Ansel Elgort, who DJs under the stage name Ansolo, blends the Babbitt brothers from Rain Man into one gearhead. He's not nearly as cool as Gosling was in Drive (or The Place Beyond The Pines for that matter) but he's as fun as Han Solo was in the cockpit. Director Edgar Wright opens the film, set in Atlanta and you'd sadly almost never know it save for the overt Ted Turner and Peachtree references, with a dance number. Elgort is as sexy as a Risky Business-era Tom Cruise and he's got the wayfarers on too as he shimmies down the street, jiving to his iPod whilst juggling a carrier of coffees.

Elgort shines in his role as Baby, a savant-like getaway driver who is as menacing as Michael Cera, who lost his parents in a crash and copes with his resulting tinnitus and PTSD with headphones and high-speed chases. Baby is a nice kid, who takes care of his elderly foster-dad and one day hopes to escape from the clutches of crime boss Doc (Kevin Spacey doing his House of Cards shtick) who he once boosted a car from and is now paying off those debts by being the wheel-man for Doc's heists. Wright isn't breaking new ground in plot and the snappy dialogue owes quite a bit from Tarantino but his dazzling choreography of burnout ballet keeps Baby Driver from being muddled in genre cliches.

Perhaps only because Baby Driver is similar in title to Refn's Drive or Walter Hill's The Driver have I read this fun film being compared to the former cold-as-ice neo-noir classics. Alhough Ryan O'Neal's "Driver" and Elgort's "Baby" share a similar one-word name, O'Neal was icy, cunning and sophisticated, Elgort is nerdy, clever and cute and has warmth left in his heart. The cavernous grey of the parking garage does also serve as a backdrop in Baby Driver, but unlike The Driver, most of the film's action takes place in daylight. Baby does, like Gosling in Drive, have a love interest that pushes him to make a clean break from the underworld but one can guess the sacrifices it takes to escape.

Baby Driver is sanguine compared to those films, even offering a sunny perspective on what life inside prison would resemble for its protagonist. Wright seems to have crafted a muscle-car musical, the La La Land equivalent of a nostalgic car-chase action-flick mixtape and Wright's musical obsessions could be judged as dubious as harsher critics have accused of Damien Chazelle. Elgort displays a sensitive side more akin to James Dean than a brooding O'Neal or Gosling and I had flashbacks of Barry Newman driving to the beat of a disc-jockey in Vanishing Point. Jon Hamm and Jamie Fox (who this time is the gunman rather than hijacked cabbie he was in Collateral) are peppery as bad dudes and the chemistry between them and Elgort give this caper some horsepower. As with Michael Mann's Collateral, Wright does take some pages out of Heat when it comes to Baby Driver's blistering gunfire scenes. Baby, who isn't prone to violence, clams up when the bullets start to fly and has to restart the song on his iPod before he can floor it. Trying to make an honest living at one point in the film, Baby is delivery pizzas and one wonders if this film would've been any different if the plot revolved around him driving for Uber -- their recently resigned CEO seems almost as evil as Frank Underwood.