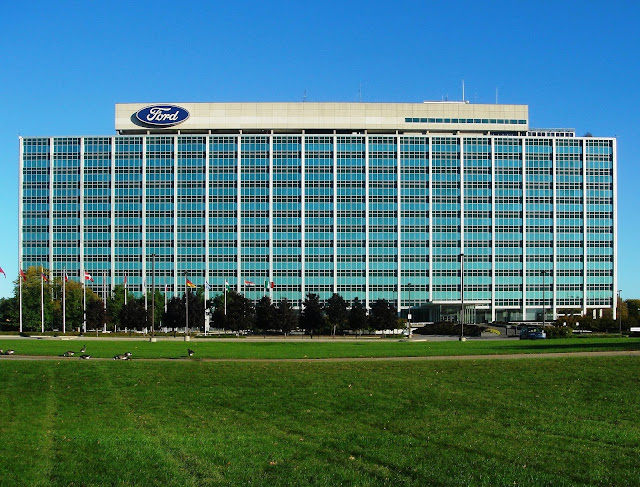 During the bulk of Field's tenure, Ford's common stock has been trading on the NYSE for roughly the price of a combo meal at Chipotle, the latest quote at $11.12 -- meanwhile I haven't stepped inside a Chipotle in the years since they were giving out sides of E. coli with their burritos -- yet their share price still hovers around the $500 mark -- with those comparisons you'd think the Ford Fusion would spontaneously start accelerating (oh wait, that's another car company - Toyota trades at a robust $107 per share). Of course, Wall Street is irrational and trades on speculation and obviously there are many factors that go into market pricing, but what it boils down to is this: despite being profitable, Ford is not a hot commodity. But Tesla and Google are.

The auto industry has been declining for roughly 40 years and modern vehicles are fancy computers with 4 wheel chassis and chairs boxed in metal to keep us safe in case of an accident, everything else is essentially window dressing. A Honda Civic will get you from point A to B just as well as a Bentley -- minus the luxuries and status signifying. Society has reached peak automobile as most everyone who needs a car has one (often obtained inside the piping bubble of auto loans), yet they are one of the most inflationary products when new and lose tremendous value when driven off the lot. In many states vehicles have become headaches to register and insure, and are susceptible to fluctuations in gasoline prices. Cars are burdensome to maintain and for many Americans an expensive repair bill would be a financial emergency. Yet millions are still sold every year -- but the numbers are beginning to decline and data suggests those sales may not be recouped in the future.

Ford's new CEO Hackett lead the company's Sport Mobility subsidiary which focused on emerging technology, most notably autonomous vehicles. One of the old famous marketing slogans from Ford was "Have you driven a Ford lately?" and it seems it could soon become "Have you been driven by a Ford?" or something to that effect. Google and many other tech firms have been developing driver-less vehicles as even a shipment of Budweiser was recently delivered by a self-driving semi powered by Uber. Ford has been a long-time player in the fleet business so it's inevitable that they adapt to a world where the chauffeur's license is replaced by an operating system. But upon closer examination there is a much bigger sea change at play.

Hackett first helped usher in the sleek renanassiance of office furniture and design when he ran Steelcase for 20 years and he then returned to his alma mater The University of Michigan where he recruited favorite son Jim Harbaugh to return to the school to coach the stale football program. Harbaugh has brought the spotlight back to Michigan football, inking a deal with Michael Jordan's Air Jordan Nike line to elevate the school's brand and despite not winning a championship (yet), Harbaugh has restored the energy in Ann Arbor as he combines the old-school grind-iron grit with social media trendsetting. Whether it's an ingenious partnership or engineering innovation, one shouldn't be surprised if the Hackett regime transforms Ford into a hot tech firm -- and that is really the only viable option for the automaker because being in the car manufacturing business is about as promising as building shopping malls.

Which brings me to the city of Dearborn, the home of Ford Motor's World Headquarters as well as two colleges, ethnic enclaves and an aging shopping mall. Ford is currently planning on a vast revamping of their campus and I've had friends who live in Dearborn point out the many buildings along Michigan Ave that the company has recently purchased or are in the process of renovating. Ford should be pivoting Dearborn as a Mid-Western alternative to Silicon Valley where real estate is cheaper and the culinary culture continues to expand throughout Detroit and its suburbs where Dearborn resides alongside. The University of Michigan-Dearborn was established through funds by Ford and it's likely Hackett will look to strengthen the connection between the entire Michigan university system and Ford in hopes of attracting and retaining the brightest minds. Can he get the job done?

When Ford introduced the Mustang in 1964, it was cool and cars in that era were as revolutionary and liberating as smart phones are today. Car phones were always silly but the phone becoming the car is no laughing matter. For Ford and the other legacy automakers it's going to be adapt or die.