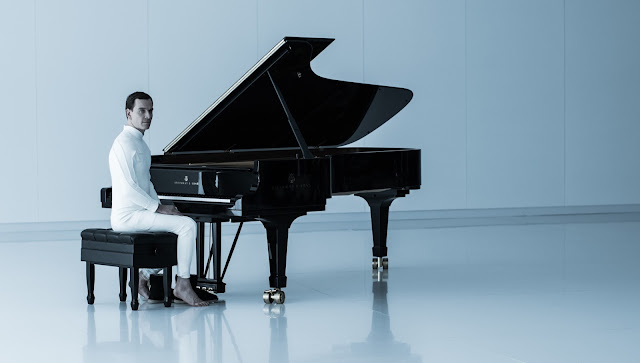 In Ridley Scott's universe there are no safe spaces, only harsh habitats and mysterious planets that rotate on an evil axis where time slips into a haunted abyss. In his new film Alien: Covenant, Scott's delayed follow-up to the original Alien prequel Prometheus from 2012, he serves a stiff cocktail of those two aforementioned films. Prometheus was a decisive film not free from flaws, but it was driven by man's curiosity to meet his maker and the intriguing premise of exploring who the "Space Jockey" was in 1979's Alien.

With Scott back at the helm of the franchise, Prometheus was epic cinema and a visual glory to behold in theaters viewed in dazzling 3D. The original idea for the Prometheus sequel was titled Paradise Lost and it followed Dr. Shaw and conniving android David to the planet of the "Engineers," the creators of mankind. A few years, a name change and a James Franco casting later, Covenant is not that film at all and has a Resident Evil-style video game cut-scenes feel to its plot development. There is even a sequence with David wearing what appears to be Fassbender's Assassin's Creed costume and when he takes off his hood he's rocking some hilarious Iggy Pop locks. It's another WTF moment in Covenant that has too many of them.

There are three bold strikes against Covenant: bad editing, a thin screenplay and hollow characters. The generic crew aboard the colony arc Covenant features a Ripley tribute in Branson (Katherine Waterston), the spiritual Captain Oram (Billy Crudup) and the cowboy hat wearing Eastbound & Downer Tennessee (Danny McBride). The film's star is neither the clueless crew nor the xenomorphs but androids David and Walter (both models played by Michael Fassbender). Walter is the newest Weyland Corporation bot who has been upgraded to fix David's transgressions. Walter is loyal to Branson and even shows the capacity for empathy as she loses her husband James Franco during a neutrino blast that hits the ship during the crew's hypersleep.

One of the more juicy images from Covenant is during that blast sequence and the aftermath of repairs, where the ship is bowed with golden sails that shimmer in the dark of space like foil -- it's the most 2001 moment in a film largely devoid of Scott's signature sci-fi glamour. The trademark facehuggers and chestbursters have lost their shock-value in Covenant and Captain Oram is responsible for the some of the dumbest decision making ever when he peers his head into an egg -- after he finds out that David is not trustworthy.

When the crew votes to ditch the plans to head to the thoroughly vetted planet Origae-6 in favor of another Earth-like dwelling that they just so happened to pick up a radio transmission from, Captain Orum clashes with Branson as he believes it's divine intervention while she is suspicious and would rather stick to the mission. Predictably, Branson is correct and things don't work out so well on this other planet, which at first does resemble paradise with its gorgeous waterfalls and wheat vegetation. Alas, this was the home of the Engineers, but we find out, in one bombastic and head-scratching sequence that David killed them all and he also infected Dr. Shaw with a virus and now he's been doing all sorts of Dr. Frankenstein shit with crossbreeds and mutations in an attempt to invent the perfect organism. It's almost as frightening as self-driving cars.

Though marketed as an action thriller hybrid of the best elements of the series, Covenant lacks the chills of Scott's original, the energy of James Cameron's Aliens or the brooding menace of David Fincher's Alien 3. Scott adds in the obligatory action and gore -- even a laughable kung fu battle between Walter and David -- but he focuses on demystifying the origins of the franchise to banal CliffsNotes: David was created by mankind, who was created by other-worldly but mortal engineers, but David can't father a child, so he creates life through the facehugger pregnancy and that's how one evolves to the chest-bursting xenomorph from the original Alien.

The prologue at the beginning of Covenant finds David in a pearl white room seated at a piano reminiscent in tone to the final act of 2001 when Dr. Bowman visits his future self at home. His creator, Peter Weyland, instructs him to play a piece and David keys the notes to Richard Wagner's "Entry of the God into Valhalla," as David sees Michelangelo's David he names himself after the statue and realizes his creator will die but he has eternal life: he's a deity, King David, if you will.

In a Fassbenders face-to-face scene, David teaches Walter how to play the flute after Walter confesses that he wasn't "programmed" to do such tasks; it appears that Weyland foresaw what David could be capable of after that piano lesson and attempted to sabotage the synthetics's takeover: but he underestimated David's self-actualization. Not only can David learn the works of the great composers but he can orchestrate his own symphony of death. This is where the Alien mythology begins to resemble The Terminator films and the Weyland Corporation and Skynet are evil swaps of Google and Apple. Maybe this whole time Scott was just wondering what would happen if Siri said the hell with us.