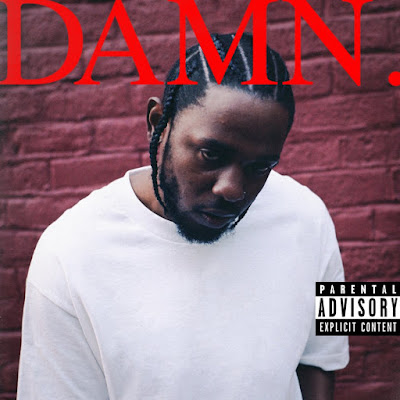 Kendrick Lamar flows in all-caps so it's fitting that his latest album, titled DAMN., is spelled out in jumbo fonts, with the one-word song titles displayed in large-print as if Lamar graffiti-ed them on billboards around SoCal, scaffolding through Compton as rap's Dark Knight. Akin to director Christopher Nolan, K-Dot composes his albums with a blend of art-house gravitas and big-budget fireworks. A hip-hop purist, Lamar recalls the spirit of Dr. Dre's Chronic albums, OutKast's thematic elements and golden-age Wu-Tang projects, packed with an animated cast of characters, captivating skits and plot-thickening interludes.

With his first release for the Aftermath label in 2012, good kid, m.A.A.d city, there was a blockbuster breakout. Dr. Dre acted as a marveling Professor X mentoring to Lamar, hovering in the background as Lamar laid out his origin story, joining the elite class of California rap superheroes such as Snoop Dogg and Ice Cube. DAMN. follows on the heels of Lamar's esoteric political jazzmattaz-funk stage, where To Pimp A Butterfly and untitled unmastered. colored further outside the lines of West-Coast genre-rap as aesthetics bordered on self-indulgence - yet Lamar delivered a truly joyous anthem in "Alright," which became a protest song during this nation's recent civil unrest.

With DAMN. the conflict between artist and activist, auteur and action-hero, hits an apex. On "ELEMENT."  a brash K-Dot begins the track by declaring to not give a fuck, that his grandmother is no longer alive to pray for him, so he ventures out like Bruce Wayne facing Gotham City in crisis, admitting that his plans to save the world backfired: "Last LP I tried to lift the black artist/ But it's a difference between black artists and wack artists." Lamar is the lonely king in the castle, bitter and irritable; but he will don the robe and crown and "make it look sexy" as he reigns over the rap landscape, defending his throne with the sharpest darts spit in the game.

DAMN. is Lamar's most focused effort to date, with his tongue razor sharp and the script laser outlined, yet his spread is still as rich to digest as a full-course meal at an Italian chophouse. DAMN. adds to his collection of museum rap classicism, fine art meant to be studied and admired, an affront to our modern era of binge-stream hyper-consumption.

Exhibit A is "XXX.", a winding concerto in four movements, opening with a dreamy auto-tune star-spangled croon until the bass drops and Lamar mumbles machismo and laments the struggle, until he hits turbo and whips a rapid-fire flow, blazing a booming beat that is drizzled with police sirens. Then he slams the breaks on the final act, diving into a ocean-breezed chiller featuring Bono humming a hypnotizing chorus. All of these shifts are condensed into a run-time of less than 5 minutes, a stark difference from Lamar's recent album cuts where some tracks stretched beyond the 8 or even 12 minute mark. This less-is-more philosophy pays in spades on DAMN. as bangers such as "GOD." up the ante that was wagered on "Money Trees" or "Alright," establishing the blueprint for what is vintage Lamar.

Although Lamar continues to clap back at Drake, there is no realistic competition as Drake is the equivalent of the NBA playoffs Toronto Raptors alongside Lamar's Lebron-esque dominance, the game's best and lyrically as furious as Rakim with flashes of a raging Hulk flow. Drake's greatest moments are mixtapes and crossover hits where his sing-song raps shift between bubble-gum and wannabe trap music.

Eccentric heavyweight Kayne West is the only realistic contender on the horizon in terms of raising the bar of creativity and last year's The Life of Pablo emerged with the gusto of the Joker at the crime scene, a brilliant, bloated caper only hampered by Kanye's batshit editing and bizarre publicity stunts. If Lamar is painting his prose as a tortured rap Van Gogh, West is not Picasso but actually Warhol, with an endless factory of pop ploys that ignite a sea of followers and imitators -- Kanye collaborated with one of The Beatles, so Lamar teamed up with U2; "FEEL." has a similar subterranean soul loop to Kanye's "30 Hours."

At times, DAMN. could be K-Dot's palm tree lined Illmatic, where boom-bap gets transported from the subway to the lowrider, with DJ Kid Capri even lending his legendary ad-libs to the mix and many of the beats vibe with the spirit of Boogie Down Productions, Mobb Deep, A Tribe Called Quest and Gang Starr. "YAH." is an uncanny ode to DJ Premier and The Alchemist lays down one of his signature grimy Queensbridge soundtracks on "FEAR." that is only a missing a Prodigy verse as K-Dot nods to Nasty Nas with the line "Life's a bitch, pull those panties to the side now." Lamar's a storyteller and the album closer "DUCKWORTH." is as novel as "One Love" or "Rewind." Over a soulful 9th Wonder instrumental, K-Dot documents the story of how his father "Ducky" and his label boss "Top Dawg"  had crossed paths back in the day when "Ducky" worked the window at a KFC that "Top Dawg" burglarized.

The narrative with Nas has historically been that his hypocrisy and commercial aspirations humanized him, that he could flip from "You Owe Me" to "One Mic" untarnished because he displayed the thirst for wealth and respect we all crave. Demonstrating an uncompromising relationship with mainstream appeal, Lamar has achieved success without sampling The Sopranos or dancing with Diddy, carry the spirit of a starving artist while eating good and seating courtside at Lakers games. While Jay-Z rapped "I'm like Che Guevara with bling on, I'm complex," Lamar flexes that his lyrics are his jewels on "HUMBLE.", that his verses are dropping gems like TED talks.

With his verbal wizardry, Lamar stands at the lectern dropping science schooled in the strength of street knowledge -- yet we are in an pro-swagger, anti-intellectual climate. DAMN. could've been the name of a Marvin Gaye or Curtis Mayfield album from the '70's when catchy, lush R&B was flanked with biting social commentary -- Mayfield's "Pusherman" from the iconic Superfly blaxploitation film begat the sort of raw reporting N.W.A. toughened-up later on and Lamar would reinterpret in the new millennium.

For all of Lamar's deep thoughts and philosophizing, the dope boys still reign supreme; I was walking home the other day and overheard Future's "Mask Off" blaring from car speakers - a song he lit the audience on fire to at Coachella last week -- and brought Lamar on-stage for.  Future - the self-declared "Super Trapper" is the charismatic super-villain, the Bane to Lamar's Bruce Wayne. Future welds brute force, a cunning crooner who leaves the lyrical exercises to the backpackers, establishing a prolific output that includes two full-length projects, the self-titled FUTURE and HNDRXX, released a week apart in '17, breaking a Billboard record for consecutive No. 1 albums.

But when examining his duets with The Weeknd and K-Dot rival Drake or his juggernaut jams such as "Fuck Up Some Commas," it's evident that Future's artistry is unorthodox yet yields compelling results with the ability to add another dimension to his music that Young Jeezy's trap music couldn't ascend to. Lamar's "DNA." is a jolting knock-out but Future's "Draco" is a trunk-rattler that may have the edge with replay value. If Lamar is crafting epic masterpieces with the flourish of seventies Francis Ford Coppola, Future is grinding out Scorsese gangster flicks. Future is on a hot streak but once the smoke clears one man emerges -- K-Dot -- whose magnum opus DAMN. has cemented his legendary status.

When Lil Wayne referred to himself as the best rapper alive it was comical, but Kendrick Lamar asserting his greatness gives flashbacks of Cassius Clay talking smack before a bout. Lamar told Zane Lowe during a recent Beats1 sit-down that he grew up idolizing the hip-hop greats and there's no point in making music without striving to be the best. On To Pimp a Butterfly the goal was to make a better world, but with DAMN. Lamar has learned that he can't do that without bettering himself first. Rapper turned Hollywood actor Ludacris recently posted a question on his Facebook that if Biggie or 2Pac hopped in your car and asked you to play the best hip-hop album to be released since their death, what would you play for them? I'd probably put on The Blueprint or Get Rich or Die Tryin' for B.I.G., for Pac....