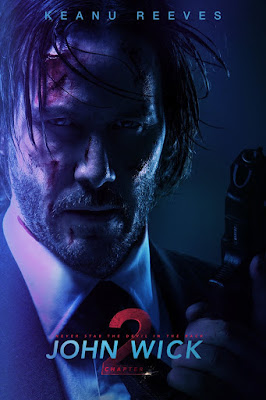 In the first movie, Wick was a heartbroken hitman who goes on a rampage after his dog is killed by Russian mobsters who steal his prized Mach I Mustang and audiences were hypnotized by Reeve's darkroom close quarters killshots and grizzled Kung fu. Chapter 2 picks up where Wick left off in the original film, searching for his stolen Mustang and kicking Russian ass.

In this sequel, as with many others in the action genre, the budget is doubled and the stakes are higher, with Wick the target of the vengeful, flamboyant Italian bad-guy Santino D'Antonio (Scarmarcio) who he owes a blood-oath favor to. Chapter 2 fills in the gaps between the stellar action sequences with formulaic sequel story-building and macho stare-downs, diving more into the assassin's code of the underworld and the inner-workings of the "Continental" hotel where Wick retreats for resources and refreshments. Each of these scenes building anticipation for the next Wick ambush of fists and gunfire.

The John Wick films are throwbacks to the action flicks of the '80s and '90s: it's Stallone in Cobra, Chow Yun Fat in Hard Boiled, Van Damme in Double Impact. The nods make sense when considering director Chad Stahelski doubled for Brandon Lee after his accidental death during the filming of The Crow, another '90's cult classic. Stahelski improves upon the style of such popcorn hits with impeccable direction and cinematography that is only surpassed by John Woo.

As a martial artist and Hollywood stuntman, Stahelski masterfully composes the fight scenes, turning them into cinematic main events with the fists of fury as dazzling as the The Raid or Kill Bill films. And in the ultimate homage, Stahelski pays tribute to Brandon Lee's father in his famous room of mirrors showdown from Enter The Dragon, as John Wick raids a glass-enshrined exhibit and makes it a tomb. It's the sort of replay button hits that make for legend.