Rewind the Revenge: The underrated William Devane in "Rolling Thunder" (1977) and vigilantes in film 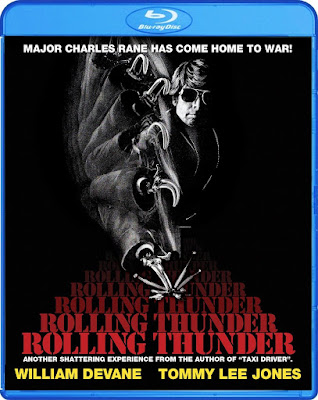 Shout! Factory release of Rolling Thunder on Blu-ray from 2013.


Released 40 years ago, Rolling Thunder is a gritty and grisly story of vengeance set along the Texas/Mexico border. Starring the "presidentially" handsome William Devane in one of his few (only?) headlining roles, the film begins with the celebratory homecoming of two Vietnam POWs (Devane and Tommy Lee Jones) as their plane touches down in San Antonio to a cheering home crowd. Haunted by his suffering at the hands of the Viet Cong for seven years, Major Charles Rane (Devane) quickly discovers that his return to civilian life is just as torturous; his wife has fallen for another man and he's a stranger to his adolescent son.

This disillusionment with the pageantry of honoring veterans and the struggles to readjust to civilian life was recently examined in Ang Lee's ambitious, crisply shot feature Billy Lynn's Long Halftime Walk (2016) where Marines are dubiously made into toy soldiers during a Dallas Cowboys intermission show. In Rolling Thunder, Major Rane attempts to bond with his son by tossing the pigskin around, but he seems more content hanging out in his faux-bunker doing push-ups and flashing back to the horrors of his imprisonment. These elements alone could be enough to drive a "Vietnam vet coming home with PTSD" story, but crafted by the twisted mind of screenwriter Paul Schrader (along with co-writer Heywood Gould), Rolling Thunder is more akin to Taxi Driver (one of Schrader's most notable screenplays) and First Blood than Coming Home or Born of the Fourth of July.

The role of Major Rane was an about-face for Devane, who mostly portrayed slick businessmen, lawyers and politicians (he was JFK in The Missiles of October). He exudes that statesman charisma combined with a toned down Jack Nicholson cadence -- in his later years he resembles a less-orange George Hamilton. I remember him most vividly as Peter Janeway in John Schlesinger's 1976 thriller Marathon Man, where he wore a suit for the entire film. Squaring off against Dustin Hoffman in several scenes, Devane was dynamic as a villain masquerading as a trustworthy ally.

Sir Laurence Olivier's classic performance as the Nazi dentist is the film's lasting legacy, but Devane held his own alongside him, Hoffman and Roy Scheider. In the film, Dr. Christian Szell (Olivier) is a Nazi war criminal who traffics in diamonds stolen from Jews during WWII. Marathon Man uses this bit of intrigue to craft one of the best paranoid-noir thrillers of the decade, akin to The Conversation or Three Days of The Condor, and it's a plot device used quite effectively years later in Spike Lee's Inside Man (2006). Released a year after Marathon Man, Rolling Thunder swaps the diamonds for silver dollars in its tale of a heist gone wrong.

When Major Rane is presented with a bounty of silver in a public ceremony for his courage in Vietnam, he later becomes the target of vicious thieves who invade his home intent on robbing him of the goods. This is where Rolling Thunder takes a dark turn, as Rane's hand is mutilated in a garbage disposal by the force of the crooks, who then gun down his wife and son. When Michael Winner's Death Wish was released in 1974, it caused a fury around vigilantism. Charles Bronson played the mild-mannered, anti-gun architect Paul Kersey, who transforms into a pistol-packing citizen enforcer when his wife and daughter become victims of crime. Death Wish remains a startling film, filled with violence and fear set in the seedy New York of the 1970s. At times, Rolling Thunder is the Tex-Mex version, with Rane cruising around in a cheery red Cadillac convertible as he crosses the border into El Paso to hunt down the men who murdered his family.

Unlike Bronson's character in Death Wish, Major Rane and his military buddy Johnny (Tommy Lee Jones) are no strangers to combat. When Rane's hand becomes mangled, he quickly sharpens his new prosthetic claw into a deadly spear and arms himself with a sawed off shotgun. Rane's hook hand is reminiscent of the sleeve-draw holster Travis Bickle fashioned for himself in Martin Scorsese's Taxi Driver. DeNiro played Bickle with such an infectious energy: the meek cabby drowning in the lonely cesspool of New York City, cast away as insignificant until he's pushed to the edge, becoming a mohawked madman going on a rampage, spitting out one of cinema's most quoted lines, "You talkin' to me?"

A landmark film, Taxi Driver was a big hit in '76, winning awards and giving momentum to Scorsese's (and Schrader's) career. Released a year later in '77 to little fanfare and even some infamous backlash at one of its screenings, Rolling Thunder has been largely forgotten in popular culture, although Quentin Tarantino has championed it as one his favorite films and influences.

It's hard to imagine raw films such as Death Wish, Taxi Driver and Rolling Thunder being released theatrically today, with their vigilante bloodshed, depictions of prostitution and Grindhouse violence toward minorities. Bronson churned out Death Wish sequels into the 90's, each less interesting and edgy than the last, meanwhile Devane was busy filming episodes of Knots Landing in the 80's. Tommy Lee Jones did revisit the Vietnam vet narrative twice, in the HBO film The Park Is Mine (1986) where he takes control of Central Park to raise veteran awareness and in Oliver Stone's Heaven & Earth (1993), where the violence was of the domestic variety.

But there's always an audience for the vigilante, and perhaps the genre is now better suited for premium cable TV, with Showtime's Dexter a prime example. Dexter Morgan and Paul Kersey are in many ways no different from imperfect superheroes such as Batman. Devane's performance as Major Rane is too muted and realistic to be a franchise, he's the every-man, not the invincible bad-ass. It's a role echoed recently where Dexter's Michael C. Hall starred in the Texan noir, Cold in July (2014), which like Rolling Thunder, featured cowboy hats, a red Cadillac and vigilante justice.

In the film's finale, where Major Rane and Johnny ambush a flophouse, the southern fried revenge of Rolling Thunder is a piping dish smothered in blood, sizzling with gun smoke and splashes from blasted bottles of tequila. The two men are already battle scarred and numbed from Vietnam so they stumble out of the brothel as if it was just a tough match on the gridiron. It's a rather eerie preview of a future where combat veterans became ticking time bombs.