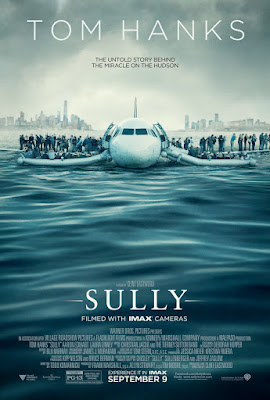 Sully is currently available on Blu ray and streaming services


208 seconds - that is the flight time in which Captain Sullenberger's plane was struck by geese and he made a miraculous emergency landing on the Hudson River. Director Clint Eastwood stretches out the affair into a 96 minute feature in Sully by mostly covering the aftermath, as Captain Sully (a white-haired, mustached Tom Hanks) and his co-pilot (Aaron Eckhart - also mustached) are grilled before the National Transportation Safety Board, who don't understand why they just didn't turn the plane around and land at an airport. How dramatic!

Is Sully just American Sniper with airplanes? Not exactly. Even though Eastwood does continue his recent trend of revisionist history by portraying the NTSB as evil bureaucrats when in reality they weren't, the film does play as an allegory to September 11th, with a riveting scene where Sully daydreams that he crashes into a Manhattan skyscraper instead of the Hudson. Sully is an American hero and the film does a noble job of portraying the man as one, but too much time is spent in melodrama between the NTSB hearings and laughable phone conversations Hanks has with Laura Linney, who plays his wife with dumbfounding aloofness. Hanks is solid but he appears about as bored with the script as passengers waiting on the tarmac. He seems to be having more fun in this skit on SNL with Alec Baldwin that parodies the film.

Robert Zemeckis' Flight (2012) is a far superior film about pilots and crash landings. Denzel Washington's Whip Whitaker is the anti-hero; an alcoholic, coke-sniffing mess who performs an amazing aviation feat on a puttering plane, although his intoxication may have been the root cause for the plane's malfunction. Eastwood's technical prowess slightly edges Zemeckis when it comes to the airplane action, but Flight has so much more to say as a movie and character study. Sully is such a stand-up guy that outside of the awesome heroics he performed, there's not much drama to be found. So instead we're treated to Katie Couric playing herself, interviewing the Captain about the Miracle on the Hudson. In the age of the 24 hour news cycle and social media, is it necessary to dramatize an event best relived on YouTube?