Grief-stricken: Pablo Larrain's "Jackie" (2016) in the new age of masculinity, femininity and sorrow. 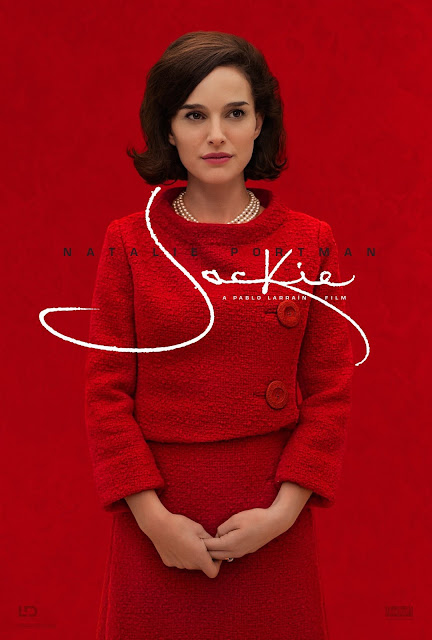 In Titanic, the sink ships, and in most films about John F. Kennedy, he dies -- in the end -- or at the beginning -- surely somewhere in the timeline. Taking a fresh approach by witnessing the events through the female perspective, Pablo Larrain's Jackie is an intense, grim account of the bloody widowing of the first lady in November of 1963 as she returns to the now cold White House that will soon be a former address, facing opposition in planning a proper presidential funeral amid national fear and heartache.

At times, Jackie is an artsier companion piece to Parkland, released in 2013 during the 50th anniversary of the assassination, which recounted the events at the hospital in Dallas where JFK's body arrived and Abraham Zapruder's quandary of capturing the fatal bullets while filming the motorcade in Dealey Plaza. Aside from chronicling the frenzy of the shooting, Jackie reveals much more of what occurred behind closed doors and the intimacy of the first lady's grief.

Natalie Portman transforms into Jacqueline Kennedy with the grace of Audrey Hepburn, poised in the role with the public stoicism and private despair that bore upon the heartbroken first lady. Employing different aspect ratios, zooms, pans and film stocks, Jackie's cinematography is immersive and true to the history of the real events as there are some rather startling moments where the viewer feels like they're following Mrs. Kennedy around. The strongest elements of Jackie are of mood and how Chilean director Larrain lassos the melancholy to suffocate the audience, there is no escape from Jackie's sadness and Mica Levi's riveting score compounds the claustrophobia.

As someone who covered another one of America's saddest days, 9/11, Noah Oppenheim is the film's screenwriter and his background in producing broadcast news is spliced into the Jackie's "explainer" scenes where Mrs. Kennedy is being interviewed in Massachusetts by Theodore H. White (Billy Crudrup) for LIFE magazine. The scenes between Portman and Crudup give a glimpse into Mrs. Kennedy's contempt for the press as she coolly puffs on cigarettes and chides White. The interactions also serve as the narrative structure, for the LIFE article, with its famous reference to "Camelot," is what the film is partly based upon.

Jackie was initially devised as a mini-series and I was at times reminded of AMC's Mad Men (especially the episode where JFK is killed), by the film's terrific usage of time-period costume and setting to capture the era. Larrain and Oppenheim must've been exhaustive to the last detail as Jackie is practically flawless in execution. This is also Larrain's first American film and perhaps his outsider slant adds to the film's potency at getting to the heart of Mrs. Kennedy's sorrow and perseverance. The portrayals of the supporting cast are mostly spot-on, John Carroll Lynch is rather imposing as LBJ, although Peter Saarsgard doesn't exactly embody Bobby Kennedy nor does he capture the Boston accent.

The strongest sequences in Jackie are when parallels are drawn between JFK and Lincoln. One rather jaw-dropping conversation occurs when, during the transfer of JFK's coffin, the first-lady quizzes the hearse driver and the man can't say who James Garfield or William McKinley, two other assassinated presidents, were. The man knows who Lincoln is and Mrs. Kennedy digs into the details of his legacy and funeral to help ensure her late husband is remembered.

In a eerie moment of foreshadowing, the film flashes back to Mrs. Kennedy taping her White House tour for the American people, offering them a glimpse into the Lincoln bedroom, where the Gettysburg Address is on display, the famous speech Honest Abe gave in November 1863. Lincoln's legacy is probably the most celebrated of American presidents, but the Kennedy's are America's most beloved political dynasty. Daniel Day Lewis was transcendent in Stephen Spielberg's epic Lincoln (2012) and it's a shame a masterpiece has not been made on JFK the man, instead of just his death. As delightful as Sally Field was, the film was not called Mary Todd -- but thanks to Jackie that might be a movie soon.

Levi's transfixing score and Larrain's deft direction is further elevated by Portman's multifaceted performance, one that displays the fiery strength and icy sophistication of the first lady. She's not tearing through boxes of tissues for the entire film and she'll be damned if getting mud on her heels prevents her from doing right by her late husband --  in her bravery the nation found solace. Currently, American politics is still reeling from the Presidential election where some were drawn to tears in Clinton's defeat. Many liberals are beginning to mourn the eventual exit of Barack and Michelle (another mostly beloved first lady) from the White House.

American political women such as Hillary, Michelle and Jacqueline have been symbols of feminist progress, women who chose not to just simply fade into the background. While Donald Trump's "locker-room talk" masculinity is regressive, conversely the popular culture is re-examining machismo and critical acclaimed films such as Moonlight and Manchester by the Sea offer unique takes on gloom and manhood. Meanwhile, Arrival, Jackie and even the comic book fare of next year's Wonder Woman feature a brave heroine figure, while two other films released this year, Gus Van Sant's The Sea of Trees (with Matthew McConaughey) and the Will Smith starring Collateral Beauty, both featured grief-stricken men who are unable to cope with loss. Jackie may be the most stylish of the "grief porn" movies released lately, but at its heart it conveys the capacity for healing that Mrs. Kennedy had.