"Nat Turners with Burners" --- Nate Parker's "The Birth of a Nation" 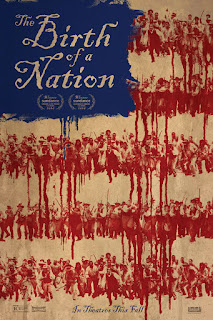 The fate of The Birth of a Nation may rest with the old adage of don't shoot the messenger.

In today's age of the knee-jerk over-reaction and hot take editorials, Nate Parker's passion piece has been rushed to judgement because of the current political climate and the director's own cloudy personal history. It's unfortunate because The Birth of a Nation is a noble effort executed with enough gusto to push it beyond simply giving Parker credit for trying to tell the largely unknown story of the slave rebellion led by Nat Turner.

There are two narratives in the lead-up to this film's theatrical release: hype and controversy. Showered with awards at Cannes in 2016, The Birth of a Nation was purchased by Fox Searchlight for a festival record bid. Amid glowing early reviews, Parker's past acquittal in a 1999 rape case began to overshadow the film's release as the movie was snubbed for screenings and online activists called for boycotts.

While Parker was found innocent by a predominately white jury, his roommate at Penn State, Jean Celestin (a co-writer of The Birth of a Nation) was found guilty of sexual assault, a verdict later thrown out and not retried. With the accuser a white Penn State co-ed and the defendants two black wrestlers for the Nittany Lions, the case was racially charged and created a contentious campus environment ending with Parker transferring, Celestin suspended and the accuser settling a lawsuit with the university. Adding to the tragedy in 2012, the woman, who struggled with mental health issues and substance abuse, committed suicide.

The Birth of a Nation begins in the darkness of the woods, with an impressionable adolescent Nat Turner being blessed in a tribal ritual, with a prophecy that he will one day do great things. Throughout his life, it is under the trees where Turner witnesses tragedy and where he later plots his revenge. As a leading man, Parker plays Turner as strong as Denzel in his finest moments. During his childhood, Turner is plucked away from the plantation by the slave master's wife Elizabeth (Penelope Anne Miller) when it is discovered he is able to read. Elizabeth begins to teach the Bible to Nat and this leads to him becoming a plantation preacher as an adult.

There are many points The Birth of a Nation is trying to make, many of which not very subtle, and some perhaps unintentional. The exploitation of religion and how it was used to manipulate slaves is one of the reoccurring themes on display as Nat's gift for gospel is commoditized by local reverend Walthall (the brilliantly seedy Mark Boone Smith) as a way to motivate slaves who won't heel to more harsh conditions. Though Turner does eventually use religion as a tool to help free himself and others from oppression, there are still mega churches and preachers with Cadillacs duping the black community today. Extending beyond the scope of slavery, religion in the medieval times was oft a weapon forged by rulers who commanded the power of literacy over the poor and uneducated.

While Steve McQueen's 12 Years a Slave bordered on torture porn, The Birth of a Nation captures the ugliness of whip lashings, teeth smashing, rape and epithets. Although McQueen's film boasted such Hollywood stars as Brad Pitt, in the end it was pure art-house, whereas The Birth of a Nation is more of an academic dramatization. There are a few thematic cliches, stylistic jumbles and not enough of the film touches on the rebellion itself, but the film succeeds in that it gives Turner a powerful cinematic face in Parker and sparks reflection on not just slavery but revolution. Unfortunately, too many people may be focusing on the man behind the camera and not the picture on the screen.

And that is the hypocrisy here, as one could point to the blind fans of Joe Paterno and Woody Allen (just to name a few) as examples of those with talent getting a pass. Which is not to say Parker is a good person. Or a bad one either. But he wasn't the only one involved in filming The Birth of a Nation. There were supporting actors, grips and countless others who helped to bring Nat Turner's story to the screen.

There are times when The Birth of a Nation clicks with harrowing images of tragedy such as lynchings set to Nina Simone's "Strange Fruit" or the beauty of the strong black African tribal man glowing from the screen. Some have theorized the movie is a call to arms, adding to the Black Lives Matter zeitgeist. Whatever Turner's true motives, it's hard to believe someone whose made homophobic statements would sit down in a room with DeRay McKesson (the gay Black Lives Matter activist). In the end, what seems to be true is Parker has successfully eclipsed D.W. Griffith's 1915 film of the same name in notoriety. Whether The Birth of a Nation will ever be judged on its own merits remains to be seen.