Lost & Found: The return of A Tribe Called Quest 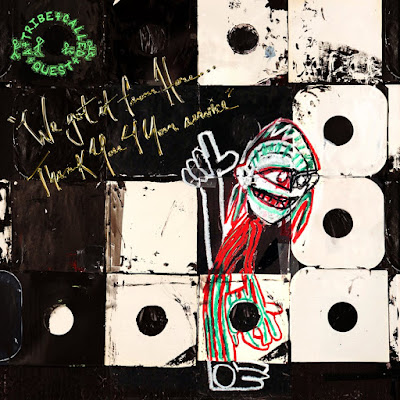 After the ending of Michael Rappaport's documentary Beats, Rhymes and Life: The Travels of a Tribe Called Quest (2011), it seemed doubtful that the historic hip-hop group would ever reunite for a new album. Whereas their last album, 1998's The Love Movement landed with a thud and a Source Magazine cover anticlimactically announcing their break-up, their 2016 return is a sneak attack that is more Sneakers than Expendables.

After the sudden death of Phife Dawg, who had long suffered from diabetes, in March, another Tribe album seemed as likely as a Smiths reunion. Much folly can be made about ATCQ being from a bygone era of rap, with technology and trends rendering them passe. But We got it from Here... Thank You 4 Your Service flips the script on veteran rap comebacks.

In 2015, Dr. Dre finally released new material with Compton, which like ATCQ was his first new album since the previous millennium. Aside from sharing guest spots from Kendrick Lamar and Anderson Paak, We got it from Here differs from Compton in both time and space. The mood, melody and heavyweight rhymes are straight outta '98-'99 (except Phife now references Tony Romo instead of Vinny Testaverde) -- even down to its "double album" billing.

J Dilla's Slum Village, Rawkus Records and Like Water for Chocolate are among the Soulquarian touchstones that seep through the soundscapes of We got It from Here. The butter smooth neo soul of "Melatonin" finds Q-Tip going full D'Angelo with a head-nodding melange of Prince funk and Roots boom bap.

In 1991, when P.M. Dawn's Prince Be shouted out "Bonita Applebum" on their smash No.1 hit "Set Adrift on Memory Bliss" who could've predicted 25 years later than both he and Phife Dawg would pass away this year from diabetes. Both songs are some of hip-hop's finest crossover radio hits that helped push beat sampling into new frontiers and influence the likes of Pharrell and Kanye.

Q-Tip recycles the most famous sitar sample in hip-hop with "Enough!!" which takes an updated middle-aged slant on the twenty-something romance that budded on "Bonita Applebum." The nostalgia continues with "Mobius" where Busta Rhymes is the most "Flipmode" he's been since the early 2000s, and Consequence opens the track with a blistering verse that quotes one of Prodigy's most famous verses, on a beat that is Mobb Deep meets Lalo Schifrin.

In the aftermath of the presidential election, ATCQ was the musical guest on Saturday Night Live with Dave Chappelle hosting on the weekend following Trump's shocking victory. Performing the frothing "We The People...", Q-Tip was the anti-pundit in a bright red leather jacket, as the Tribes' "street smart" lyrics took the system to task. In the face of backward politics, it's refreshing to hear these elder-statesman of rap take issue with discrimination, furthermore recruiting Elton John for the rippling "Solid Wall of Sound."

When the Native Tongues emerged in the late '80s, the collective that included De La Soul and ATCQ were seen as jazzy, happy alternatives to the controversial anti-establishment rap of N.W.A and Public Enemy. We Got it from Here finds these Native Tongues now in leather, raising black fists -- but it's not just soap box pandering, these are mature artists who have fear of a wack planet.