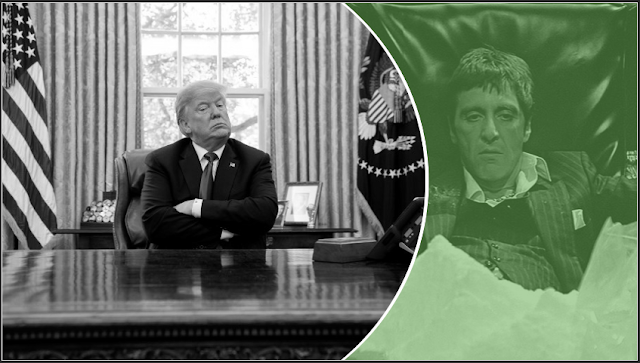 Bill Maher recently joked that he envisioned Donald Trump's presidency concluding like the ending of Scarface: Tony Montana barricaded in his office, nosediving into a mountain of cocaine, eyes blazing with fury. Brian DePalma's stylish retelling of the original gangster tale from the public enemy era starring Paul Muni, the Al Pacino incarnation was given an upgrade this year as Universal rolled out a sparkling 4K disc. Debuting in 1983 at the prime of a Reagan era that would embrace the anything goes capitalism  driving Tony Montana's rise, Scarface has since aged from a beloved anti-hero epic to a prophetic vintage that lingers within the American spirit. The story of Tony Montana is as perverse as the one of Donald Trump, set to the demonic drumbeat of end-stage capitalism.

In the first act of Scarface, Tony Montana arrives in Miami masquerading as a political prisoner, fleeing the clutches of Castro's communist Cuba. He and his pal Manny Ray (Steve Bauer) are unable to convince the immigration officials and are sent to a dingy refugee camp burrowed underneath a highway - such conditions not much better than the ones faced by those entrapped in the current border crises under the Trump administration. Tony Montana, the violent drug lord, does embody the fears Trump drew upon during his first presidential campaign when he directed vitriol toward immigrants. But as Trump's four years in office and his past history as a shady businessman have shown, it is Trump himself and Tony Montana who share much in common.

Prior to politics, Trump was as baked into our pop culture mythology as Scarface; especially in hip-hop circles, from Brad Jordan rapping under the Scarface moniker to Raekwon's memorable "Guess who's the Black Trump" one-liner on "Incarcerated Scarfaces" that later birthed the song "Black Trump." On Rick Ross' debut album from 2006, Port of Miami, he rapped over a sample of "Push It to the Limit" from Scarface. Port of Miami blended Tony Montana and trap tales, with the blistering track "White House" stuffed into the middle of the album as Ross boasts: "Now I push shit bigger than the President/I'm at the White House known as my residence." Akin to the hyperbolic alternate realities peddled by Trump, it was later revealed that Ross had embellished his cartel persona and was a prison guard prior to making music. But just like music or movie stars, Trump's inflated Manhattan shark status was still a glamorous symbol of aspirational wealth, preached in The Art of the Deal and The Apprentice. Trump's allure reached far beyond rap to have a mass appeal. And like the crime-bosses in mafia movies, Trump's flamboyance and strong-arm business tactics were more Gambino than GM. 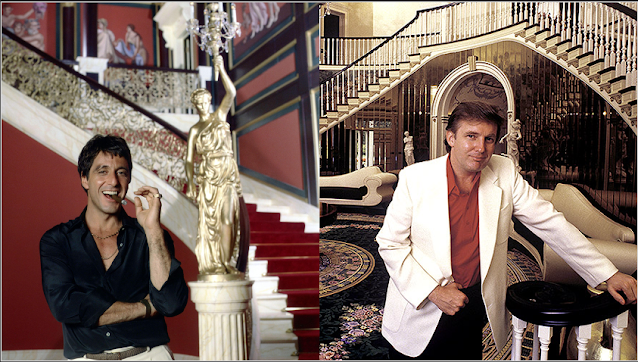 After murdering a political enemy in exchange for a green card, we find Tony Montana's sweating as a line cook at a street-side shack in Little Havana, quickly disillusioned by the American Dream as he eyes drug dealers living large outside the nightclubs. Montana wants a bigger slice of the capitalist pie and quickly realizes that the underworld is his path to money, power and women. Montana quickly moves up the ranks of a cocaine trafficking organization run by Frank Lopez (Robert Loggia), who takes Montana under his wing and promises to make him a rich man. Tony has found his mentor in Frank as did Trump in Roy Cohn. But Montana, a textbook sociopath, immediately begins to resent Frank and contradict his boss while also courting his wife Elvira (Michelle Pfeiffer).

The parallels with Trump's power drunk tantrums and unreciprocated loyalty are neatly summed in a scene where Tony is arguing with a banker over the rates charged for laundering his drug money. The sloppy negotiations and poorly hatched schemes are pure Trump. Tony Montana perceives slights everywhere and has no moral compass aside from a compassion for children. He gets into bed with a more ruthless and refined kingpin than himself in Alejandro Sosa (Paul Shenar) and begins to flail when the temperature rises. Earlier in the film, when Frank's henchman Omar (F. Murray Abraham) snickers that Tony is a peasant,  I thought of how the powerful elites and sinister dictators of the world view the bumbling Trump.

If Scarface was a fictional realization of rags to riches no matter the cost, the byproduct of a capitalist system that looks the other way as long as the money machine hums, where one could truly believe that "The World is Yours" as long as you have the grift and grind -- then Trumpism is the Frankenstein of late-stage capitalism - it's the bogus hedge funds, pyramid schemes, trust fund entrepreneurs and every other grotesque amalgamation of free market rot -- shaken into a Molotov cocktail that blew the doors off the White House. Akin to Trump berating the establishment, when Tony Montana rails against the corruption and paralyzing control of communist Cuba, he's not advocating for democracy but for anarchy.

Trump and Scarface both exude a toxic cloud of machismo and project their own reality distortion fields. Tony equips the illusory truth effect when reuniting with his mother and sister, as he claims to be earning an honest living while waving a wad of cash. Tony uses a similar tactic in pursuing a romance with Elvira, relentlessly talking a relationship into existence until she finally caves to his demands - after he has her husband murdered no less: "grab 'em by the pussy," indeed. As he marinates in a giant soapy tub in his ornate bathroom, cussing Manny and Elvira out the door, comforted by the pelicans on the TV screen, it reminded me of Trump devouring fast-food while watching Fox News as presidential aides scurry about.

But it's not the finale of Scarface being a metaphor for Trump's last days in office that is the most compelling analogy. Instead it's the restaurant scene earlier in the film, where Tony is belligerently drunk as he's beginning to realize that his days are numbered and a nasty fight erupts with Elvira. She splashes her drink in his face, he cusses her out and the other diners gawk at the scene playing out before their eyes. Tony then shifts his trainwreck toward the entire restaurant, blasting the hypocrisy of the all the do-gooders: "you need people like me, so you can point your fuckin' fingers and say 'that's the bad guy'... so say goodnight to the bad guy, the last time you gonna see a bad guy like this again, let me tell you." While some of Trump's critics have framed his one-term presidency as an aberration, it's increasingly clear that Trump will remain influential and America has still not reckoned with the mirror's reflection. For all the carnage, over 70 million people weren't ready to say goodnight.