Dustin Hoffman at 80: Looking back on his "New Hollywood" era with "The Graduate" (1967) and "Straight Time" (1978), two different slices of Americana that shatter the #MAGA myth 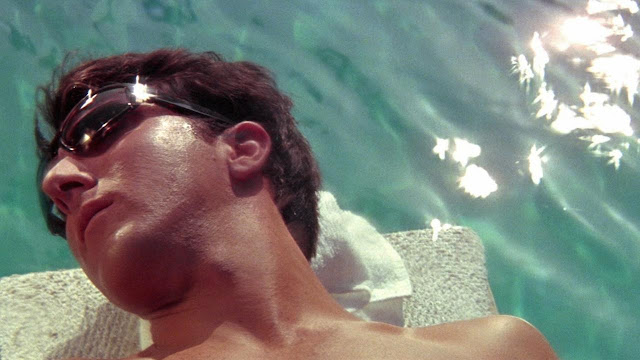 What The Graduate hinges on is the unnerving quiet before a revolt. The ticking dissatisfaction that eats away at a bright young mind is at the center of Dustin Hoffman's character Benjamin Braddock, a recent graduate from the prestigious Williams College, where he was quite the scholar. Confronted with the anxiety of what to do in the real world, Benjamin is aloof and staring blankly at those who pat him on the back and ask him about his future plans, to which he has no clue. Hoffman presents the viewer with a man-child, a rich-kid whose not cool enough to be a hipster, but also yearning to rebel against his doting, hovering parents and the upper-crust banality.

Released in December of 1967, The Graduate is a watershed film from a turbulent year in American history:  race riots spread through Detroit and the rest of  the country, the Black Panthers emerge, Vietnam war protests swell on college campuses, the Cold War chill still permeates and the hippie counterculture takes shape during the Summer of Love. Yet Mike Nichols' film ignores the current events of the '60s, as Benjamin exists in a cozy bubble where he can dip in a pool and ponder his future -- he seems predetermined for greatness but his biggest problem at the moment is inertia. Two other iconic films from '67, Bonnie & Clyde and In Cold Blood, seemed to predict the cracks in the American Dream beginning to form and welcome the coming hysteria and bloodshed. Conversely, The Graduate is a stoic, passive observer obsessed over what would be labeled "first world problems" today. But for this reason, Nichols' film is the more relevant and powerful indictment on current American culture 50 years later.

While Truman Capote began to poke holes at the facade of the coastal bourgeois in his 1958 novella Breakfast At Tiffany's and later examined the madness of the American frontier with groundbreaking "true crime" novel In Cold Blood, The Graduate hilariously roasts the west coast elites. Benjamin has been reluctantly grandfathered into the Good ol' Boys Club and endures his parents parading him around on a pedestal, dressing him up in silly scuba gear during his 21st birthday party (symbolizing graduate Ben as a fish struggling out of water, or the safe confines of college) and the famous line of being advised by an grown-up friend of his parents that there's a future in plastics.

When Benjamin is being seduced by the wife of his father's business partner, Mrs. Robinson (Anne Bancroft), a chain-smoking lush pre-dating Desperate Housewives, his innocence is shed away through comical high-jinks. In witnessing Benjamin's disillusionment and loneliness, his ambivalence of being gifted a sparking red Alfa Romeo convertible as a graduation present, he later achieves a perverse revenge against his parents in his affair with Mrs. Robinson as the autumnal hum of Simon & Garfunkel's "The Sound of Silence" purrs in the background.

Nichols' taut direction is part of The Graduate's staying power, a straightforward zany escapade that could still happen today. Simon & Garfunkel's classic songs add generational permanence to the scenes they seep from. Hoffman offers a preview of his acting chops that would be perfected into the '70s; as Benjamin he is convincing as the awkward, anti-social virgin transformed into a bumbling bad-boy, never losing the audience's urge to root for him to get from under Mrs. Robinson's (and his parents') thumb. Continually pressed by not only his father (William Daniels) but Mr. Robinson to take out the daughter, Elaine, Benjamin at first recoils at the notion and then tries to disgust her away by bringing her to a strip joint. Benjamin relents and then after a brief fling, Elaine is sickened to discover the affair between her mother and him.

When Benjamin races to Berkeley in attempts to win Elaine back, there are some hints of the counterculture and social uprising when he is warned about being an "agitator" from a landlord, a word uttered a couple more times in the film thereafter. There are no scenes of protests at Berkeley's campus in The Graduate nor a moment of political chatter between Benjamin and Elaine, only a hanging vibe that they are the being oppressed by their elders. But they don't strike the type to protest, be it Occupy Wall Street or Vietnam. That is until the final act of the film, when Benjamin crashes Elaine's "arranged marriage" wedding, as they flee the church, he fends off the family with a gigantic crucifix that he then wedges the church doors shut with. The rebellious couple frantically hop onto a bus, gushing and amazed as they drive away. Where would they go? Defect to Canada? Would they become hippies? Turn into yuppies later on? Become born again Christians? The 1960's and '70s spawned a generation of youth disconnected from their parents, but as they've become the elders now, many went on to vote to Make America Great Again. Did they forget what it meant to be disillusioned? 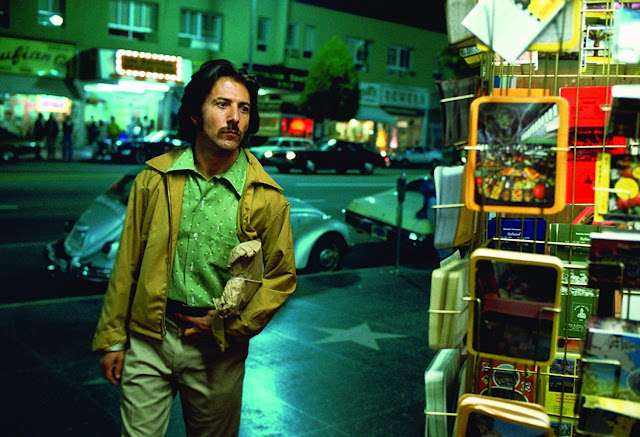 I first viewed Straight Time in middle school as a VHS rental at Blockbuster in the late '90s during which I had gone through an appreciation of Dustin Hoffman's filmography and was taken aback by this little film I had never heard of. Originally to be directed by Hoffman himself, he became overwhelmed by also starring and producing and thus handed to the reigns to Ulu Grosbard. Released in '78 at the prime of the "New Hollywood" era, Straight Time is a masterful crime thriller that tells the story of recent parolee Max Dembo (Hoffman) who tries to stay out of trouble -- for a little while.

Straight Time shares the same gritty Los Angeles aesthetics of Walter Hill's The Driver and feels right at home with other '70's desperate thieves flicks such as Dog Day Afternoon and Charley Varrick. Capturing an era long gone, with the grain and flecks popping through the print, it paints the city as filthy as Scorsese did the Big Apple in Taxi Driver. Hoffman is superb, eclipsing some of his other seminal '70's performances such as Marathon Man, portraying the criminal minded Dembo with raw intensity, a man who displays a sensitive side but can snap into a rage when the heists fly south.

When Dembo is released from prison in the beginning of the film, he is placed under the watchful eye of hard-ass parole officer Earl Frank (M. Emment Walsh) who condescends and sabotages him. The stark realism of the life of an ex-con in Straight Time is jaw-dropping in scenes where Dembo, with his greasy hair, scruffy clothes and trashy mustache, scrounges up money for the most humble lodging in a dingy flop house or can't spare enough scrunched up dollar bills to pay for a steak dinner during a date with love interest Theresa Russell. Straight Time documents the doomed and forgotten, a stark contrast to the privilege of The Graduate (or Rain Man for that matter). While it is not a "road movie" in the traditional sense, it does follow Dembo down a road of carnage and speaks to the increasing climate of inequality and class warfare beginning to brew in the '70s as jobs began to ship overseas and the economy was in a tailspin.

Dembo is based upon the exploits of criminal turned novelist, screenwriter and actor Edward Bunker, whose 1973 book No Beast So Fierce was purchased by Hoffman's production company and became the basis for Straight Time. During the steak dinner in the film, Dembo remarks that some convicts prefer the structured life inside the cell, that having freedom on the outside walls is too wild of a beast to tame. Straight Time examines recidivism with honesty, when pushed and harassed by his parole office to the brink, Dembo resolves to his instincts and the second half of the film catapults him into a delirious, nail-biting crime spree. Soon enough we witness Dembo chasing the next score, allured to the high.

When Dembo sets-up a jewel heist with two buddies (the superb Gary Busey and Harry Dean Stanton), he falls victim to his own hubris and the robbery quickly turns into a frantic flee from the police. Things not ending well for those that cross paths with Dembo is foreshadowed earlier in the film, when the wife (a young Kathy Bates) of Busey's character tells Dembo that he really shouldn't be coming around their family. But Dembo, a sociopath, is persistent and naive to his predicament, always imposing his will on others, be it with a smirk or a smack-down.

Hoffman has always shined brightest as a chameleon of tragedy, adding lumps to our throats as he exhumes souls of the fragile, solitary wounded birds, sprinkling enough courage in these anti-heroes to give us hope. Be it the jaded malaise of The Graduate, the socioeconomic downtrodden in Straight Time, the autistic anxiety attacks in Rain Man, escaping a Nazi dentist in Marathon Man or exposing the Watergate scandal in All the President's Men, Hoffman's canon from '67 to '88 is the counterpoint to those yearning for the selective memories of an American past that was maybe not so great after all. As the tagline goes to The Graduate: "This is Benjamin, He's a little worried about his future" -- coming from the present, there is still much to be afraid of.