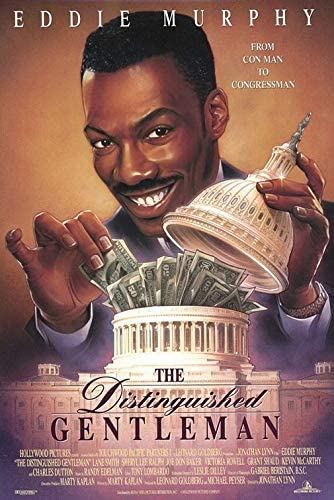 I remember seeing The Distinguished Gentleman's poster at theaters in 1992 and the VHS at Blockbuster but just never caught this movie. Tepid reviews and lackluster box office returns, combined with Murphy's declining star power into the mid-90s made this film fade quickly into obscurity. After watching another Murphy vehicle from '92, Boomerang, a couple weeks ago, a fun romantic comedy with an all star black cast (Murphy, Martin Lawrence, Chris Rock, Robin Givens, Halle Berry, Grace Jones, etc) that is still fresh and charming today, I really wanted to finally see The Distinguished Gentleman. After tracking down an out-of-print DVD on eBay and watching it this evening, it definitely resonates with the current election season. Perhaps 28 years ago there was more belief in the political process but now it seems most realize the system is rigged. Written by a Washington insider, this tale of a con-man who hustles a seat in congress when he realizes it's the ultimate grifter's game is a dark comedy in the purest sense. Certainly not one of Murphy's funniest movies (the jokes are just too real - especially now) but definitely his most subversive.